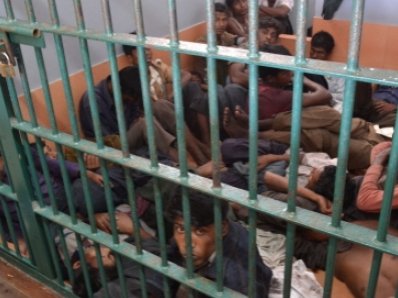 The statement comes after 68 Rohingya were arrested in Phuket last week, and 158 in Trang and Satun provinces last month.

The status and location of the 226 Rohingya is currently unclear amid conflicting reports of transfers and possible human rights abuses by the Thai authorities, much like the case in 2009.

In 2009, Thailand faced harsh criticism when authorities arrested Rohingya refugees and sent them back out to sea with limited provisions.

The LCT, described as the Thai equivalent of a bar association, issued their statement a week after Human Rights Watch (HRW) urged the government to allow UN access to determine whether any of the detainees were seeking refugee status. (See Phuket Gazette, ‘Refugees land in Phuket’, February 5. Digital subscribers click here to download the full newspaper.)

The council, to a great extent echoing HRW’s concerns, calls on the Thai government to allow “refugee-related organizations to access and provide support [to Rohingya], and in cases where they are victims of human or labor trafficking, the Ministry of Social Development and Human Security and other concerned departments must intervene and deliver necessary assistance”.

The statement also demands that the Thai government not “illegally deport Rohingya people” and that it “seriously prosecute human trafficking gangs.”

For an in-depth report on developments and the plight of the Rohingya, pick up a copy of the Phuket Gazette due out this Friday afternoon (February 11).