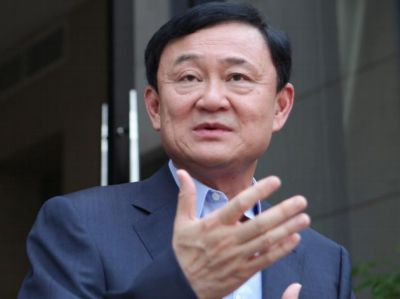 Phuket Gazette partner newspaper The Nation quotes Surapong as saying that the passport will be issued as a “New Year’s gift”.

Thaksin’s Thai passport was revoked after he fled the country to avoid jail following the military coup that ousted him in 2006.

“When Thaksin’s passport was cancelled, there was no order from the courts or the police to seize it,” Surapong said. “So I will use my authority to do whatever is not illegal under the regulations of the ministry to give the passport to ex-premier Thaksin.”

The minister went on to note that he deemed it appropriate to issue Thaksin a passport despite his fugitive status because other fugitives, like veteran politicians Somchai Kunplome and Vatana Assavahame, still had their passports.

Thaksin’s sister, current Prime Minister Yingluck Shinawatra, insists that she had nothing to do with the move to reissue a Thai passport for her brother.

“I have never interfered in this case; I’ve left it to the relevant officials,” she is quoted as saying. “It is a matter to be decided by the Foreign Ministry, but must be decided in line with the law, and the principles of justice and equality”.

Thaksin’s legal adviser Noppadon Pattama said the former premier had no knowledge about this plan and that he was still using the passport issued to him by Montenegro. Thaksin was stripped of his Thai passport by the previous government but received citizenship from Montenegro last year, allowing him to travel internationally.

The return of Thaksin will likely further anger large segments of the Thai population, already angry with his sister’s government’s suggestion of an amnesty for him. They argue that any person convicted of serious crimes should not be given a passport.

Phuket and its surrounding provinces in the south of Thailand have a long history of political conservatism and adherence to the opposition Democrat party, but there were no significant protests here during the ‘Red Shirt’ (pro-Thaksin) riots in Bangkok earlier this year.

Thaksin fled overseas before he was sentenced to two years in jail in 2008 for abusing his authority as prime minister by helping his then wife to buy prime state land at a discount.

There are still a number of other serious cases pending against him.