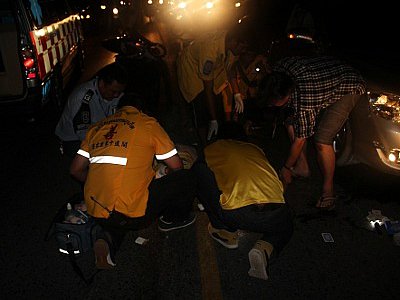 PHUKET: A German tourist was killed and her son seriously injured in a motorbike accident on Wednesday about 100 meters ahead of her husband and the boy’s twin brother, who were on another motorbike.

Nicole Wittig, 47, was driving the motorbike at about 11pm on a road near the Laguna resort complex with her 17-year-old son, Mark, riding pillion when she crossed the center line and hit an oncoming Toyota Camry, said Cherng Talay Police Officer Boonlert Champa.

At the time of the accident, the Wittigs were returning to their room at the Laguna Beach Resort after having dinner, explained Sen Sgt Maj Boonlert.

Mrs Wittig’s husband, Ruediger, was driving another motorbike with Mark’s twin brother, Tom, on board.

Mr Wittig said that he was too far behind his wife’s motorbike to see what happened, but he heard a “crash” and came upon the scene to find his wife and son lying unconscious and bleeding in the road with their smashed motorbike lying nearby, a reliable source told the Gazette.

It appears as though Mrs Wittig and Mark were not wearing helmets at the time of the accident, Sgt Boonlert said.

The driver of the Toyota Camry, Chalermpol Thavorn, 32, told police that when he reached a curve Mrs Wittig’s Yamaha Mio crossed the line and collided with his vehicle.

Police seized the car for further examination. Mr Chalermpol, a Phuket native, did not flee the scene, Sgt Boonlert said.

Police presume that Mrs Wittig’s unfamiliarity with the road and poor lighting were factors in the accident. Sgt Boonlert said that the lack of night-time visibility in the area has led to numerous accidents, adding that he would like to see lighting installed.

The Wittig family had checked into the resort only hours earlier after arriving from Khao Lak and were due to return to Germany tomorrow, a source said.

German Honorary Consul Dirk Nauman told the Gazette that he was aware of the accident but had yet to be contacted by police, as is customary in accidents involving foreign nationals.