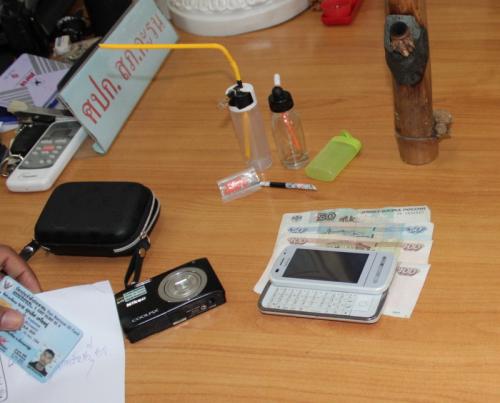 PHUKET: Karon Police yesterday arrested two teenagers for a bag snatch after eight days of tracking down their suspects.

Russian tourist Tatiana Suslirova reported to Karon Police on April 18 that her yellow bag had been snatched from her while she was walking near the Karon Princess Hotel.

She told the police that two young men riding a motorbike rode up beside her. One of the men grabbed her bag and the men sped off on the motorbike.

On receiving the report, Karon Police Deputy Superintendent Sophon Borirak led a team of officers to immediately investigate the case.

After gathering witness statements and following up on scant clues, the officers yesterday afternoon raided the rented room of 19-year-old Supalerd Krueayu and his 14-year-old male accomplice in Karon.

During questioning, Mr Supalerd recanted that he had dumped Ms Tatiana’s yellow bag behind Wat Kata.

Both teenagers confessed to theft by snatching and possession of a Category 1 drug.

“They said they bought the drugs with the stolen money from tourists,” said Lt Col Sophon.

Though there was an arrest of a serial bag thief in Thalang on Wednesday (story here) and a man was arrested after he was tracked down by his victim’s iPhone on Tuesday (story here), Sub Lt Niphon Temsang of the Karon Police said the number of bag snatching reports in Kata-Karon was relatively low.

“Bag snatching doesn’t happen often in Karon. However, we urge all people to beware of bag snatchers wherever they go, and to take precautions to prevent their bags from being stolen,” he said.

“If anyone does become the target of a bag snatch, please do not fight for the bag. That could be dangerous. Just call us as quickly as possible at 076-396 393,” Sub Lt Niphon said.

“Anyone who witnesses a bag snatch is also welcome to call us to report it,” he added.

Sub Lt Niphon confirmed that the 14-year-old boy arrested yesterday is now in the custody of the Phuket Juvenile and Family Court.

“He is likely to be handed down only a light sentence,” he added.