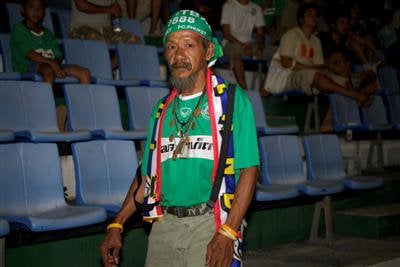 PHUKET: FC Phuket advanced to the third round of the Thai FA Cup thanks to a 2-1 victory away at Samut Prakarn yesterday.

The Southern Sea Kirin qualified for the second round match after beating Nakhon Ratchasima 2-1 at home in the opening round.

Prolific teenager Adisak Kraisorn, who was named ‘man of the match’, opened the scoring in the sixth minute. His strike partner Chakrit Rawanprakorn, who has also enjoyed a highly productive season in front of the goal, added a second in the 37th minute.

Samut Prakarn staged a comeback with a goal late in the second half, but FC Phuket held on for the win and will progress to the third round of the competition.

The third-round draw has yet to take place.

It was the first-ever match between the sides, which both play in Division 2 conferences in the Football Association of Thailand’s regional league.

Yesterday’s match was played at the Sports Authority of Thailand Stadium in Bang Phli, home of Suvarnabhumi Airport.