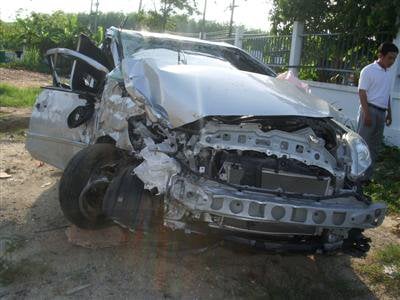 CHERNG TALAY, PHUKET: A Chinese man was killed in a car crash when he overshot a curve and slammed into a wall on Monday night.

At the scene, Lt Supachai and Kusoldharm Foundation rescue workers found a heavily damaged Toyota Vios crashed into a wall.

It took rescue workers 15 minutes to cut their way into the car.

Although a police source said Mr Lee was already dead, pictures printed in a local Thai language newspaper showed the man had been fitted with a brace, an unusual procedure to perform on a dead man.

Witnesses told police they saw Mr Lee driving fast along the road towards Surin Beach until he lost control on the sharp curve.

Mr Lee’s body was taken to Thalang Hospital for examination.