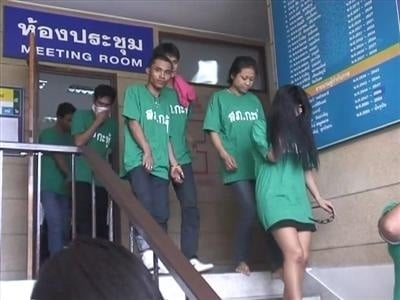 PHUKET: A drug dealer presented at a police conference in Phuket yesterday admitted that he was acting under orders from a prison inmate.

The suspect was one of 10 presented to the press in the meeting room at Patong Police Station yesterday.

Two more suspects, not present at the conference, were arrested in neighboring Thung Thong Police District, reporters were told

One of the suspects was given an order to make a drug delivery by an inmate during a prison visit, Col Pekad said.

Col Arayapan said he was satisfied with the results of the “White Patong: free of illegal drugs” campaign now underway.

Strict suppression by police had reduced the amount of illegal drug use in the district, Maj Gen Pekad concurred.

Collaboration by local communities and business operators has played a key role in the success, he added.

Within two months, police will begin issuing “Strong community: free of illegal drugs” certificates to locales that are successful in eradicating illegal narcotics in their areas, he said.

Solving the problem of illegal drug use is key to crime prevention and a host of other social problems, he said.

To this effect, police all over Phuket will collaborate with district offices and the Phuket Provincial Office in compiling lists of known drug offenders, he added.

Each police district in Phuket will also be tasked with naming one community in their jurisdiction as a “Strong community: free of illegal drugs”, he said.