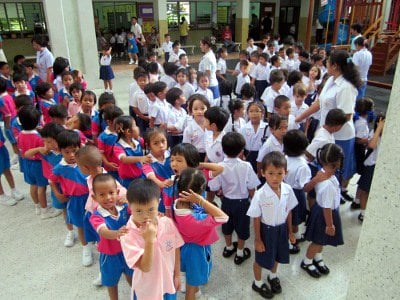 PHUKET: Phuket officials are lining up an intensive campaign to make sure that all Thai children in Phuket of ages seven to 14 are issued national ID cards as required by a new law that comes into effect on Sunday.

The National Identification Card Act 2011, which was signed into law in May, mandates that all children of the ages seven to 14 must obtain a national identification card.

Parents have one year from this Sunday to comply.

To handle the huge boost in issuing the cards, officials in Phuket are coordinating a campaign to make sure they can issue as many cards as quickly as possible.

“When we are ready, parents or teachers will be able to request an identification card for children,” Muang District Chief Supachai Pochnukul told the Phuket Gazette today.

“We are coordinating with schools to make appointments and set dates that will be the most convenient. Otherwise, if they all came at the same time, it would be too much for us to handle,” he said.

“We are also planning to offer ID card services through mobile units, such as from vans. We also plan to extend service hours on Saturdays,” Mr Supachai added.

Mr Supachai explained that documentation and fees will be the same for children as they are for adults.

In addition to certified copies of the applicant’s birth certificate and house registration (tabien baan), the current fee of 100 baht for issuing an ID card must be paid.

As with ID cards issued to adults, ID cards for children will be valid for six years, Mr Supachai said.

“They can obtain an ID card anywhere in the country that is convenient – not just the place of their birth or residence,” he added.

He went on to explain that the new system will make it more convenient in providing government services to children, such as education.

“[When requesting or applying for services] they will not need to bring all their vital documents like before because all data will be included [on the smart-cards],” Mr Supachai said.

According to the Phuket National Statistic office – sourcing data from the Department of Interior – as of December 30, 2010, there were 42,158 registered Phuket residents aged seven to 14 years old.

There are an estimated eight million registered children in the same age range nationwide.