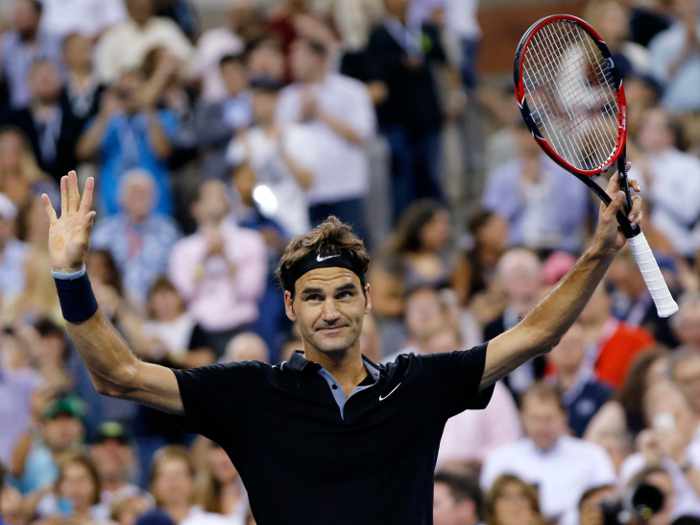 PHUKET: Despite boasting 34 grand slam singles titles between them, Serena Williams and Roger Federer were forced to share the spotlight with a 15-year-old at the U.S. Open on Tuesday as all three advanced to the second round.

The second-seeded Federer, looking to extend his record men’s haul of slam titles to 18, posted a 6-3 6-4 7-6 (4) demolition of Australian Marinko Matosevic as the 33-year-old’s boyhood idol Michael Jordan of basketball fame looked on.

“He was just my hero of all sports,” said Federer, who has collaborated with Jordan on a sneakers design. “Besides (Stefan) Edberg and (Boris) Becker being my tennis idols, I had Jordan as my all-sports idol.”

Williams advanced 6-3 6-1 over unseeded fellow American Taylor Townsend as she followed Federer onto the Arthur Ashe Stadium court to cap the second day of the championships.

Should she go on to win the tournament, the two-time defending champion would join Chris Evert and Martina Navratilova in fourth place on the all-time list of women’s grand slam singles champions with 18 titles apiece.

“Hopefully, I can just build on this,” said Williams, who has had a disappointing slam season with her best result a fourth-round exit at the Australian Open back in January.

Margaret Court (24), Steffi Graf (22) and Helen Wills Moody (19) are the only three women to have won more grand slam titles.

Other leading contenders were keen to display their skills on a sunny day in Flushing Meadows.

Wimbledon champion Petra Kvitova and runner-up Eugenie Bouchard launched their Open campaigns with a bang, blasting by their respective first-round opponents with a minimum of fuss.

They were joined in the second round by eighth-seeded former world number one Ana Ivanovic, 11th-seeded Italian Flavia Pennetta, 16th seed Victoria Azarenka and 2011 champion Sam Stosur, but the biggest jolt of energy was supplied by Bellis.

Playing on the secondary Court Six, the teenager added her name to the record books by becoming the youngest female to win a match at the U.S. Open since Anna Kournikova in 1996.

“I went into the match thinking it was going to be such a great experience,” said the pony-tailed Bellis, who received her wild card when she became the youngest player to win the girls’ 18s national championships since Lindsay Davenport in 1991.

“But I never thought I would come out on top winning. I’m still in shock about that match.”

Third-seeded Kvitova of the Czech Republic crushed Kristina Mladenovic of France 6-1 6-0, while Bouchard was nearly as efficient in dismissing Olga Govortsova of Belarus 6-2 6-1 in the afternoon sunshine.

“I’m very happy. First round is always nerves,” said the hard-hitting Kvitova, who won the lead-in tournament in New Haven last weekend. “It was the same today. When I wake up, I start to feel nervous. I was just glad how I played today.”

Kvitova fell at the first hurdle here after winning her first Wimbledon crown in 2011.

“The other grand slams are a big challenge for me right now. I remember 2011 when I lost my first round after winning Wimbledon, so I’m just glad that I’m better already,” she said with a smile.

The 20-year-old Bouchard, the only woman to reach the semi-finals of the year’s first three majors, answered questions over her hardcourt form with an overwhelming win.

Seventh-seeded Bouchard, who won one match in three events since losing to Kvitova at the All England Club last month as she was bothered by knee and hamstring injuries, ripped 19 winners and forced 24 errors from an outclassed Govortsova.

“Obviously I would have liked more matches, but that’s the way it is sometimes,” said the aggressive baseliner.

“I still feel very confident with myself.”

On the men’s side, 10th seed Kei Nishikori of Japan, 13th-seeded American John Isner and 25th seed Ivo Karlovic of Croatia were among first-round winners.

Although five of eight U.S. men in action were eliminated, Sam Querrey gave local fans something to celebrate with a 6-2 4-6 6-4 4-6 6-3 win over Maximo Gonzalez of Argentina.