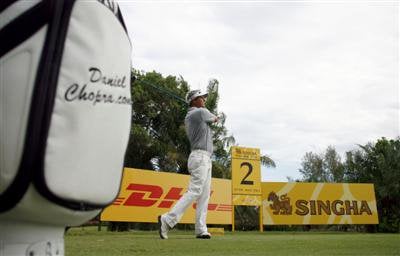 LAGUNA PHUKET: The 2009 Singha Thailand Open golf tournament starts today, with the stars of the Asian Tour well prepared after several practice days on the fairways and greens of the modified Laguna Phuket championship course.

Among those with high hopes to win the event is Thai superstar Thongchai Jaidee, fresh from his victory at last week’s Indonesian Open. The win was his 11th career title – the most of any player on the Asian Tour.

As he set out on his practice round, the world’s No. 71 looked focused, brimming with confidence and clearly excited to be back playing in his home country.

“It’s good to be back playing the Thailand Open, and it’s good being here at Laguna Phuket. I’m happy with my game, especially with last week’s win, and I am looking forward to the tournament,” he said.

Mr Tongchai can expect stiff competition from current Asian Tour Order of Merit leader Anthony Kang of the USA, who also looked in a determined mood during practice. In Phuket he seeks to protect his spot atop the money list and continue his excellent start to the season, which included a victory at the Maybank Malaysian Open.

USPGA star Daniel Chopra admitted that he was surprised at the difficulty of the Laguna set-up, revealing that the course was a lot tougher than expected, especially the rough – the thickest he’d ever seen in Asia.

After winning the 2008 Mercedes-Benz Championship, the Swede opted to revamp his swing, a decision which has led to a slump in his recent form. Chopra feels, however, that the changes he has made to his swing are about to pay off.

“With my control of the ball getting better and not thinking about the swing changes anymore, I feel I am getting closer every week,” he said.

It is clear that the Thailand Open means alot to the local players.

Thai star Chinnarat Phadungsil of Chanthaburi, who burst onto the Asian Tour in style by emerging as the youngest ever winner after winning the 2005 Double A International Open in Bangkok at the age of 17, summed up the sentiment perfectly.

“This is our biggest event as we are playing for the King’s Trophy,” he said.

With most players having spent the two practice days rehearsing and memorizing putts from every angle on the greens and strategically plotting the best way to play the Laguna course, the Singha Thailand Open promises to be a tournament to savor.

After a long spell of hot and relatively dry weather, Phuket recently got some much needed rainfall that is returning the landscape to its typical lushness. The forecast during the four-day event is for mostly overcast conditions with a chance of thunderstorms and high humidity throughout.