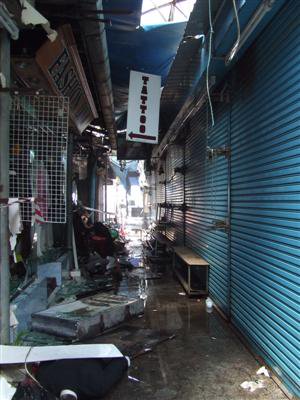 PATONG, PHUKET: A fire broke out at the Kebsup Shopping Plaza along the beach road in Patong last night, causing over a million baht in damage – but no injuries.

The blaze broke out at around midnight at one of the many stalls selling tourist-oriented items at the mouth of the soi, well known for its tailor shops, bars and massage parlors.

It took 11 firetrucks and 32 firefighters about three-and-a-half hours to finally get the blaze under control.

The charred remains of some 10 damaged shops were still smoldering at noontime today.

The firefighting effort was hampered by limited access and the amount of thick smoke generated by the fire, which was fueled by garments and other combustible materials.

Kathu Police Superintendent Grissak Songmoonnak estimated the value of the damaged goods at no more than two million baht.

An electrical short circuit is suspected to have started the fire, though the cause is still under investigation, he added.

Tourist Steve Rothwell from Manchester told the Gazette from his stool at the nearby Piccadilly Bar that he and about 100 other guests staying in hotels and guesthouses in the area were afraid to retire for the night for fear that the fire would spread to their buildings.

About 50 dwellings in the area lost water and power, he said. At about 3 am, flames 20 meters high were still blazing from one tailor shop, he said.

Over the years there have been numerous fires in similar establishments that line the beach road. Most are attributed to faulty wiring.

However, in mid-February two major fires within four days caused an estimated 15 million-baht’s worth of damage at the Jintana Shopping Plaza, located more than a kilometer to the north along the beach road from Soi Kebsup.

Police are still investigating those fires, which they suspect were the work of arsonists.

Phuket roads among Thailand’s most dangerous