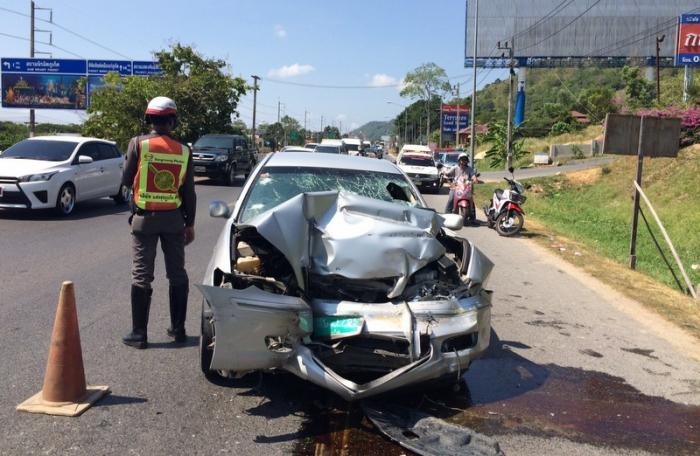 PHUKET: Three passengers travelling in a taxi that collided with a crane on the bypass road on Saturday are recovering in hospital and expected to be discharged later this week.

Police are still investigating the circumstances of the collision, which resulted in the death of the taxi driver (story here).

The three Chinese passengers, each of them aged 25 years old, were on their way to the airport when the collision occurred.

“Our initial investigations have revealed that the taxi driver tried to overtake a vehicle on the inside lane and crashed into the rear of a slow-moving crane,” said Lt Col Sakchai Chunyong of the Phuket City Police.

One of the passengers, Ting Zhu, suffered a minor back injury. The other two, Chunyan Zhao and Yujia Yang, sustained leg fractures, Col Sakchai confirmed.

The crane driver, Sittipong Promtong, 32, was not injured in the collision. He told police that he had just left the company’s office and had only driven about 40 meters down the road when the taxi slammed into the back end of the crane.

Ms Zhao and Ms Yang are currently undergoing treatment at Vachira Phuket Hospital, whereas Ms Zhu has been released from medical care.

“We expect to discharge them within two to three days,” said Dr Chawalit Chaimanee, a surgeon at Vachira Phuket Hospital.

Col Sakchai said police were trying to conclude the case as soon as possible.