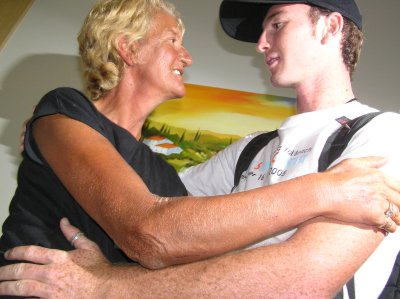 PHUKET: Australian mother-of-four Dominique Courteille, 57, survived an ordeal of four days adrift on the Andaman Sea and in the Straits of Malacca in a dinghy.

Speaking to the media at Bangkok Hospital Phuket (BHP) today, the Belgian-born naturalized Australian said that on Thursday she and her crew went ashore on Koh Lipe, in Satun Province, to eat at a restaurant, leaving her yacht Sonnet moored only 150 meters offshore.

Later that night, she returned to the yacht alone as the other crew members, Manfred “Richie” Neustifter, 24, and Conrad Ohlier, 43, had decided to stay on the island a while longer.

However, the dinghy’s engine ran out of fuel as Ms Courteille was returning to Sonnet, and a combination of high winds and abnormally-strong currents swept the now-powerless boat out to sea.

“I went straight past the yacht and tried to row as best as I could but I’m not the strongest of rowers,” said Ms Courteille. “I then tried to signal to other yachts with my oars and I shouted for help, but pretty soon they were too far away and couldn’t hear me.

“At first I was very relaxed because I was sure that my friends, who are good sailors, would notice me gone, and come to find me. But it was nighttime, so it was very difficult for them [to do so] and by that time I had already been taken too far out by the current, which was much, much stronger than usual.”

She said, “It was terrible because there was shipping passing and it consisted of cargo ships and fishing boats, all of which were much bigger than my dinghy. I was going very slow and the waves were high. I was trying to get them to notice me and I shouted and shouted, but the wind carried my voice away.”

Ms Courteille went on to explain that each day of her ordeal she tied a rope around herself and slipped into the sea, so as to avoid direct sunlight.

Contemplating death, Ms Courteillle wrote on the dinghy’s sides, “I did not commit suicide! It was an accident with the engine that sent me off into the blue. I am very sad to die because I would have loved to see you live. I’m astonished that no one has come looking for me, because I’m three miles from the island and, after that, nothing. I love you all. Think of me from time to time while dropping a flower in the water.”

Help finally arrived yesterday in the form of a Indonesian fishing boat from the Yee Long Trading Company. The crew members took her on board and fed her biscuits and water, her first food for four days; all that she had consumed during her ordeal were her own urine and six antacid tablets.

Pol Sgt Yaomarn Chumchen of the Tourist Police told the Gazette that she was rescued around 5 pm. She explained that the Indonesian boat arrived in Phuket 12 hours later and that Ms Courteille was first taken to the fishermen’s accommodation in Pae Diok on Koh Sireh. Tourist Police officers later drove her to Bangkok Hospital Phuket for treatment for exposure and dehydration.

Ms Courteille managed to find something positive from her ordeal, telling friends that at night she had seen beautiful constellations. “You know, I was never afraid; I was sure that something [good] was going to happen.”

Dr Santi Lertnukkhid of BHP said, “She was in surprisingly good condition and was quite strong when she came in, considering that she has a history of congenital liver disease. This experience has been tough for her, but she survived.”