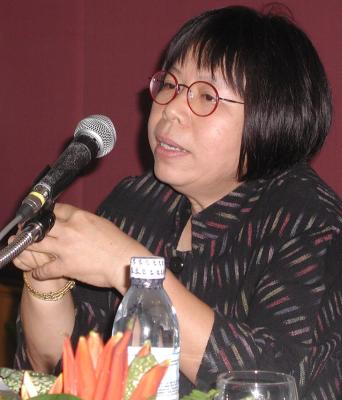 BANGKOK: Suwalai Pinpradab, Director of the local office of the Tourism Authority of Thailand (TAT), said that the goal of Phuket becoming a truly ‘world-class’ destination is a pipe dream unless a variety of problems are dealt with.

These, she said, include high-volume, low-paying tourists; poor service in all sectors of the hospitality industry; and a crumbling natural environment.

Speaking with the Gazette during a Market & Product Briefing for TAT directors, government officials, and industry representatives at the Queen Sirikit National Convention Center in Bangkok, she said, “Phuket is a place to enjoy sun, sand and sea but no one is taking sufficient care of the environment [to maintain this reputation].”

Referring to the recent placing of two Phuket hotels  – the JW Marriott Phuket Resort & Spa and The Racha Resort and Spa– in the Condé Nast Traveler (USA) Magazine’s 2004 top 100 hotels, K. Suwalai said, “This reinforces Phuket’s reputation worldwide. But all hotel staff [on the island] should be trained to provide a ‘world-class’ service.

“We must get to work on these problems immediately,” she warned.

Other problems to be addressed, she said, include poor service from tuk-tuk and other local transportation providers, and tourists being cheated.

K. Suwalai said that the niche markets the TAT in Phuket would focus on include independent women travelers, Japanese tourists, and students on cultural exchange visits – again with Japan as the main focus.

She said she also foresees continuing growth in the golf and diving markets in Phuket.

The TAT is also about so-called “zero-cost tourists” and the companies behind these tours, K. Suwalai noted.

One overseas TAT office director – who asked not to be named – characterized zero-cost tourists as those from the lower end of the market who prefer cheap shops and typically patronize only restaurants and hotels owned or run by their fellow countrymen.

K. Suwalai said that the TAT Phuket office will meet with travel agencies in Beijing later this year to try to negotiate minimum prices for package tourists.

“How much tourists pay is how the TAT defines their quality,” she concluded.

OrBorJor sets up planning board