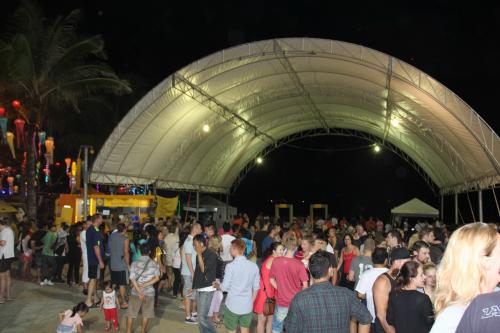 PHUKET: The crowd of 50,000 people predicted by the Sydictive party organizers has yet to appear on Patong Beach, despite the event having started last night.

The much-ballyhooed party got off to a seven-hour late start yesterday due to incomplete preparations. It reopened today at 3pm to a small group of people.

Despite some complaints on the Sydictive Element’s Facebook page about last night’s late start and the small crowd, organizers continue to talk up the event.

“So far we have sold more than 20,000 tickets on line and we expect that soon there will be 50,000 people joining our party. Eleven internationally famous DJs will join the party,” said Sydictive Element CEO Vorrachart Petchnunthawong.

Should the crowds materialize, security forces are ready for them, with Phuket Provincial police posted at entrance and exit to check for drugs and weapons, and more than 500 Royal Thai Navy and marine officers on guard.

Several high-ranking officers from the Phuket Provincial and Patong Police forces are also at the venue.

As of 5:30pm, a Phuket Gazette reporter at the scene saw plenty of staff and security people standing around waiting for the party to begin – but few people showed much interest in joining what increasingly looks to be a snubbed event.

Today’s schedule of international DJs was advertised to start at 3pm.

No matter where you are or how you choose to celebrate this New Year’s Eve, the Gazette wishes one and all a happy and safe new year.