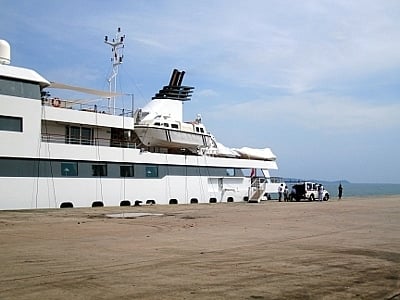 PHUKET: Phuket Police do not suspect foul play in the death of a Swedish woman whose body was discovered yesterday in the cabin of a superyacht where she worked as a crew member.

The 90-meter yacht Lauren L, taking part in the Asia Region Superyacht Rendezvous, was making the journey from Langkawi to Koh Yao in Phang Nga Bay. The vessel was anchored in Patong Bay when fellow crew members discovered Miss Lindgren’s body in her cabin.

Once aware of the tragedy, the crew sailed Lauren L to Phuket Deep Sea Port, where they were met by police, medical and rescue staff.

Capt Sakon Krainara of the Phuket City Police told Phuket Gazette, “The body of Miss Lindgren, a guest relations employee aboard the private yacht, was discovered by a crew member.”

“A doctor at the scene examined Miss Lindgren’s body before its transfer to the Vachira Phuket Hospital morgue. He believed that she had a pre-existing medical condition that might have led to her death. They are in possession of her medical file,” Capt Sakon revealed.

“The Swedish consulate has notified relatives,” he added.

Phuket Kusoldharm Foundation worker Kritsada Suwannaroj told the Phuket Gazette, “She was found dead in her cabin at 7am by a co-worker who came to check on her when she didn’t report for work.”

He estimated the time of death at about 2am the same day.