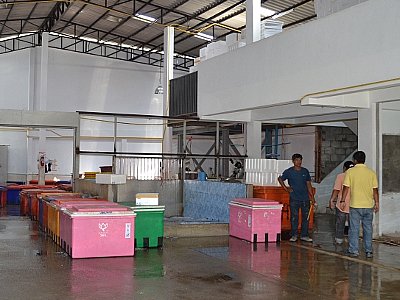 PHUKET: The Silver Hotel in Phuket Town has complained to the province that odor from a nearby seafood processing plant is costing them up to 400,000 baht monthly in lost revenue.

The formal complaint followed an inspection of the nearby Phuket Union Foods Co Ltd factory in March this year, after which the management of the family-run business promised to address the issue “within three months”.

Accompanying the Vice Governor were representatives from the Phuket Provincial Industry Office, Phuket City Municipality, the Phuket Natural Resource and Environment Office and a representative of the Damrongtham Center, which serves as the provincial ombudsman’s office.

“The complaint filed with the Damrongtham Center by Mr Monluck stated that for the last ten years the seafood processing plant has allowed contaminated water to drain onto hotel property. This has been particularly noxious between the hours of 6 and 11 am, when breakfast is served at the hotel,” V/Gov Somkiat said.

“In March, I went with Damrongtham Center staff and officers from the relevant Phuket government departments to inspect the facility…I ordered them to manage their waste so as not to bother nearby hotels and the local community,” he said.

Specifically, he instructed them to handle seafood in designated areas only and install an effective waste-water management and aeration system to kill the bacteria that produces the offending odors.

As the company was not represented at the meeting, it is not known what measures, if any, have been put in place.

“There is still a fishy smell in our hotel every morning,” Mr Monluck charged. “The management has done none of the things they agreed to do and I’m losing 300,000 to 400,000 baht a month because of that. Our customers are leaving because they can’t stand the smell.”

“I would like to have an official letter from the Provincial Government ordering the company to vacate the area in three to six months time,” added Mr Monluck.

V/Gov Somkiat said the province would still like to see a solution worked out that would satisfy both parties.

“We’re not ignoring the issue. We would like to see both businesses continue. The Phuket Provincial Industry Office will discuss the possibility of relocation with the processing plant owner. They will keep the hotel informed of progress made.”