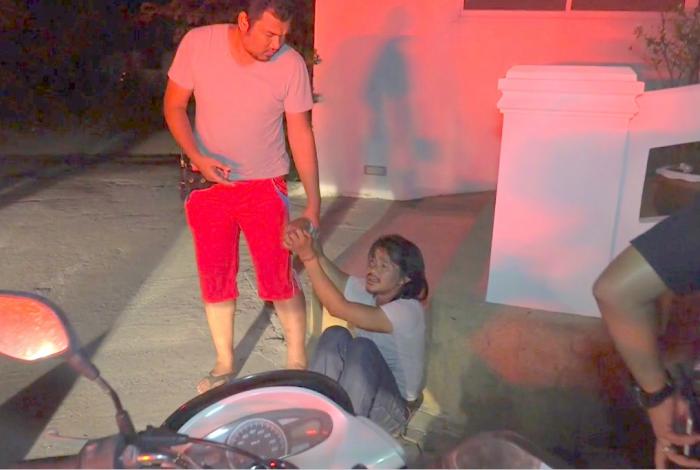 SAMUI: Police in Koh Samui are hunting for a hit and run suspect who injured a motorcyclist and shot at police officers before escaping last night.

Lt Col Denduang Thongsrisook of Bor Put Police said traffic police officers were in the area and went to check.

“A golden brown pick-up truck crashed into a motorbike in Chaweng at about 11:50pm, landing the motorcyclist in the hospital. The driver of the pick-up drove away when he saw the police,” the colonel told Phuket Gazette reporters.

“We followed the truck, which the driver parked in front of’ First Residence Hotel’ and ran. As soon as we got close, he shot at us, missed, and ran into a nearby soi. The passenger in the truck, named only as ‘Jiab’, surrendered himself to us,” said Col Denduang.

Mr Jiab told police that the driver, Kraiwuth Boonphutphong, was a speedboat captain and also his friend. Two knives and a BB gun were found inside the truck.

“We geared ourselves up with bulletproof shields and cordoned off the soi. We couldn’t find Mr Kraiwuth, so Mr Jiab took us to his girlfriend’s room, where we found ya ice (crystal methamphetamine) paraphernalia and a gun,” said the colonel.

Police are still searching for Mr Kraiwuth, who was nowhere to be found. The motorcyclist was subsequently discharged from the hospital