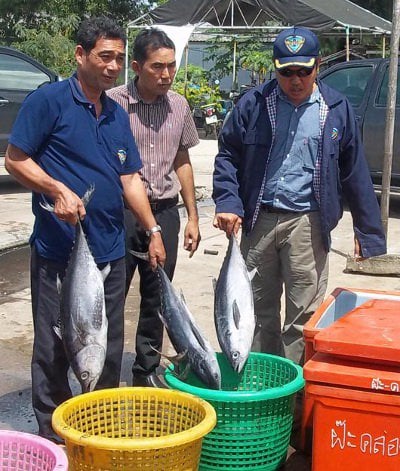 One of the fish, so large it was originally thought to be a “little tunny” or “false albacore”, was brought for examination to the Andaman Sea Fisheries Management Center Krabi on Tuesday.

The specimen, weighing in at 5kg, is a good sign for the condition of the water off the coast of Krabi, said center director Jaroen Omane.

Longtail tuna usually live in deep water, 80 meters or more. They are a popular species for sports fishing enthusiasts, but are not easy to find in the shallower waters off the coast of Krabi, Mr Jaroen explained.

The Krabi fishermen believe these fish have migrated from other areas because the sea off Krabi has become a more fertile feeding ground.

“We expanded the non-fishing area from 3,000 meter to 5,400 meters offshore during the spawning season. The fact that fishermen caught 5-6 kilograms longtail tuna means the marine environment has improved, which would explain why the fish have migrated closer to shore,” said Mr Jaroen.

“It is very popular for sushi,” he added.

Fishermen have been catching longtail tuna in local waters for the last ten years, but until recently they had been smaller, just three to four kilograms, Mr Jaroen concluded.

Phuket is currently home to the third-largest tuna fishing fleet in Asia and the local industry continues to grow with Taiwanese investment. Most of the catch is exported to the US and Japan.