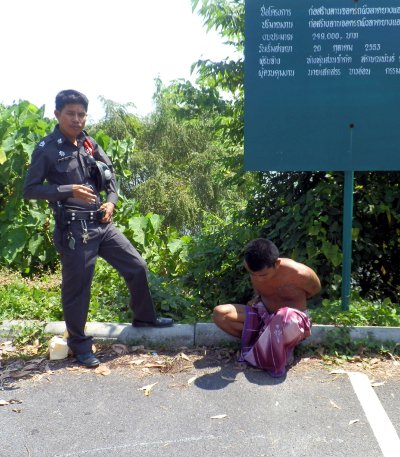 PHUKET: It took Phuket Police just half an hour to arrest a suspect for the theft of a pickup in Thalang District this morning. They think the man may have been deranged or under the influence of drugs.

Cherng Talay Police were notified of the theft of the pickup truck at 10:30am by vehicle owner Sakhon Chalermwanphenyo.

Mr Sakhon said he parked his Isuzu D-Max pickup in front of his home off Soi Khoktanode 3 in Cherng Talay, then left the keys in the ignition and went behind the house to eat.

As he was eating, he heard the truck engine revving. By the time he ran back to the front of the house, someone was already driving off in his pickup.

Mr Sakhon notified Cherng Talay Police immediately and within half an hour Thalang Police spotted the vehicle parked a few kilometers away in front of the small RorPorChor Reservoir, opposite the entrance to the Ban Bang Jo Remand Prison.

Fearing the thief may have abandoned the car and jumped into the water, officers from both Cherng Talay District and Thalang District Police closed off the area. They eventually found the suspect, a man aged 25-30, dressed only in a loincloth and walking around the area “like a man in a deranged state or under the influence of drugs”.

The suspect, who would only give his name as “Maan”, is now in custody at a cell in Cherng Talay Police Station awaiting questioning and formal charges.

Crime and Phuket Tourism: Getting it into context