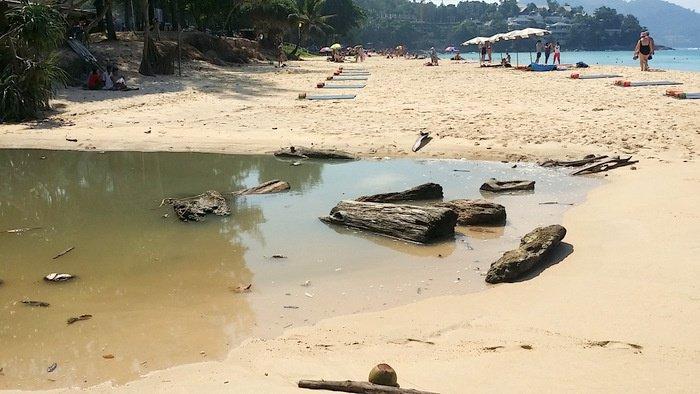 “The wastewater is from beachfront shops in the area. Some of the shops have acted responsibly and treated wastewater before releasing it, while others have not,” he said. “Either way, they will all be demolished on April 20 (story here).”

At the time, Mr Ma-ann blamed the lack of necessary wastewater treatment plants, which were in the process of being built.

“When the wastewater treatment plants are complete, there will never be black water again,” he told the Phuket Gazette. “But until the project is complete, all I can do is apologize for the black water.”

Construction of the treatment plants in Surin and Bang Tao, to the tune of 355 million baht, started on August 8, 2012. By 2014, the multitude of infrastructure projects designed to stifle the stench and improve the quality of water being released from the Bang Tao Canal into the ocean were only about 30 to 40 per cent complete (story here).

“Although they were contracted to begin functioning by August 8 this year [2015], the project has had some delays and will not be ready until near the end of this year [2015],” Mr Ma-ann said last year, without any explanation for the contractors’ failure to perform.

“We have sewage trucks collecting wastewater directly from buildings along the canal to reduce the volume of wastewater entering the stream.

“We also add chlorine to the black pond before the water crosses the beach, as a disinfectant and to reduce the stink. This is the best we can do at the moment.”

Wachira Sakulchit, the chief administrative officer (palad) of the Cherng Talay OrBorTor, told the Gazette today that the date for the project’s completion has been further delayed.

“We are now aiming to have the project finished by the end of 2016 or the first quarter of 2017,” he said, without elaborating on the reason for the delay.

However, Mr Ma-ann does anticipate that once the illegal shops are removed the issue will be resolved.