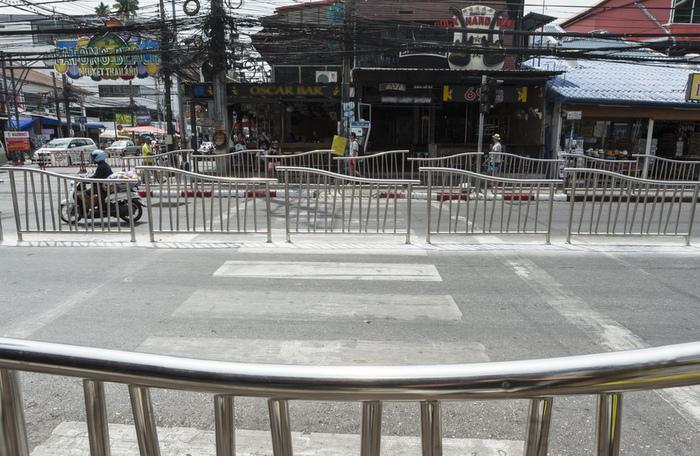 However, the new sidewalk railings on either side of Rat U-Thit 200 Pi Road outside of Tai Pan Discotheque and Rock City Pub have caused some concern.

“The fence, all in all, is not a bad thing. It helps guide people to a specific place to cross the street. But what would happen if Tai Pan Discotheque or Rock City Pub needed to be evacuated immediately? There is no chance to quickly remove the fence in front of the doors at these locations,” a Phuket Gazette reader wrote.

“As for the yellow blinking signs at the crossing areas, why not just make it a stop light?”

Ms Chalermluck explained that there was still room for adjustments to the new measures, which are a collaboration between the Patong Police and the municipality.

“Pedestrians crossing the road can put them in danger and create traffic jams. So we want people to cross at designated areas,” Ms Chalermluck said. “Making a stoplight at the pedestrian crossing would only create more traffic. However, we will discuss this issue with the Patong Police in next month’s meeting.”

Ms Chalermluck confirmed that the measures, which also included a make-shift roundabout at the junction of Nanai Road and Prachanukhro Road are only experimental.

“If we get a lot of negative feedback about them, we can simply remove them,” she noted.

Ms Chalermluck urged both locals and tourists to submit any suggestions or complaints to the municipality so that they may be brought up during the discussions.