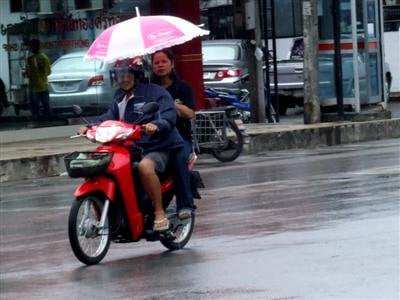 PHUKET CITY: The Meteorological Department (MET) has issued an advisory of strong monsoon conditions in Phuket over the next few days resulting in unusually rough seas and scattered showers with the possibility of torrential rain at times.

In its national weather advisory issued earlier today, the MET reported that a trough of low pressure lies across the North and upper Isarn, while the strong southwest monsoon prevails over the Andaman Sea, Thailand and the upper Gulf.

However, Ranong’s Muang District was the only district in the southern region included on its list of areas at high risk of flash flooding, along with numerous districts in the North and Isarn.

Nevertheless, the Phuket office of the Department of Disaster Prevention and Mitigation (DDPM-Phuket) on June 16 issued a warning that remains in effect advising people in risk-prone areas of the island to be aware of the potential for flooding and landslides and be prepared to evacuate if necessary.

All ships should proceed with caution and small boats should keep ashore over the next few days.