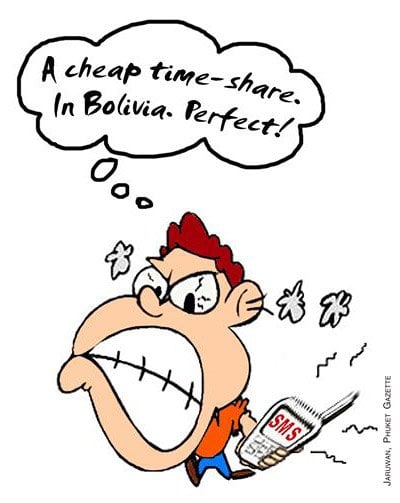 PHUKET: Fed up with the annoying SMS messages and breathless phone calls imploring you to buy awesome ring tones? The Thai government wants to help you, but here in Phuket, at least, don’t expect much interim relief from your mobile phone service provider.

“We plan to introduce something like a ‘Do-Not-Call Center’ in a bid to block unwanted SMS messages,” said Prime Minister’s Office Minister Satit Wongnongtaey earlier this week.

Satit is also the chairman of the Consumer Protection Board.

In foreign countries, telemarketers and attention-getters are barred from contacting someone who has registered his or her phone number with a Do-Not-Call Centre.

The Consumer Protection Board (CPB), the National Telecommunications Commission, mobile phone service providers and the Thai Insurance Commission will discuss the issue on July 4 in a bid to identify ways of blocking unwanted SMS messages, Niroth Charoenprakob, secretary general of the CPB said.

The CPB is getting more and more complaints about the annoying phone spam.

“We’ll find out how advertisers get consumers’ personal numbers,” said Niroth. “The CPB will ask relevant agencies such as mobile phone operators to help block the SMS messages, and ask them to open hotlines for consumer complaints. We’ll also consider new regulations to guard people’s privacy.

“Our initial investigation found that some banks give customers’ numbers to insurance companies so they can sell policies via mobile phones. We also found that numbers had been sold to advertisers by cellphone operator employees and administrators of certain associations,” he added.

A recent survey by Assumption University showed that most people want the government to step in and stop the spam. Of 1,379 respondents, 71.6 per cent said the government should put and end to such intrusive marketing techniques as they disturb peoples’ lives.

Satit said he would be pushing the idea of a personal data protection law as a way of stopping the ‘selling-on’ of mobile phone numbers. “I expect the draft bill to sail through Parliament at its next session,” he said.

Meanwhile, it seems that Thailand’s mobile phone service operators, whose business is the sale of phone calls, don’t want to receive any. The Gazette’s efforts to reach the three providers in Phuket were futile. The AIS office, on Chanacharoen Rd in Phuket Town, insisted that it actually does not have a telephone number and told our reporter that anyone wanting to do business “must” walk in.

AIS does have a national “Call Center” (1175), but after the protracted music it defaults to ‘We’re busy; leave your number and we’ll call you back”.

DTAC, the nation’s second largest operator (after AIS), has an office on Thalang Rd near the post office in Phuket Town, but no telephone number. Like AIS, they accept walk-in inquiries only. Their national placebo is at 1678. Spam cessation requests are not on the menu.

True Move also does not publish a telephone number, but its placebo, at 1331, offers an opportunity to speak with a human being. He or she may or may not be able to assist, depending upon the complexity of the caller’s issue. Our reporter was unable to develop any useful information on spam control.