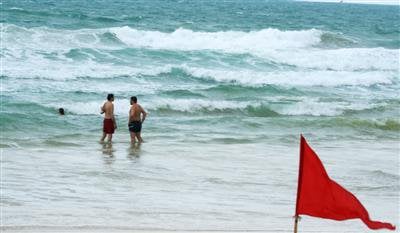 PHUKET: It will come as little consolation to the families and friends of those who drowned off Phuket’s beaches in recent weeks, but lifeguards are finally in place on 12 of the popular local strands.

New signs have also been erected at the beaches alerting tourists to the dangers of swimming during the monsoon season.

A spokesman for the Phuket Provincial Administration Organization (PPAO), Jalernkiat Kaewpetch, said a company signed a contract to manage beach safety across Phuket on Tuesday.

At Karon Beach, a sign included a message in English signed by Karon Mayor Thavee Thongcham.

“The monsoon season has started and on certain days the sea can be very dangerous. Whenever the red flag is placed, we urge you not to swim in the sea as there are invisible undercurrents which are almost impossible to detect from the shore.

“Too many accidents occur every year on the Andaman Sea beaches and we cannot assume responsibility for every one,” it said.

The signs explain, in Thai and English, the red and yellow flag system intended to stop tourists from swimming when conditions are dangerous.

Red flags mean people should not enter the water; yellow flags mean swimming is allowed, but lifeguards are not on duty; while yellow-red flags mark areas patrolled by lifeguards.

Under the contract, LP Laikhum will have to provide certified lifeguards on duty from 8am until 7pm daily.

On Karon Beach this morning most swimmers were in areas under lifeguard supervision and marked on either side by yellow-red flags.

Confusingly, yellow flags were also on display in these areas, even though lifeguards were on duty.

There were also people swimming in red-flagged areas of the beach.

Doug Cowmeadow, a tourist from Australia said, “I saw a girl getting in trouble earlier in what couldn’t have been more than two feet of water. I was watching quite closely because I thought I might have to rescue her.”

One man happily swimming in an area marked with red flags was Anders Kjell from Sweden. “I know what the red flags mean but I am not going in too deep so I don’t think it is very dangerous,” he said.

There are still a number of pathways onto the beach that have no visible signs to warn tourists of the dangers of swimming in the sea.

“There are signs, but you could easily get onto the beach without seeing one. We come from Australia so we know what a red flag means, but would someone who is not used to beaches realize its significance?” Mr Cowmeadow asked.

“I did see a sign a bit further up the road, but I think there’s need for more.” Mr Kjell said.