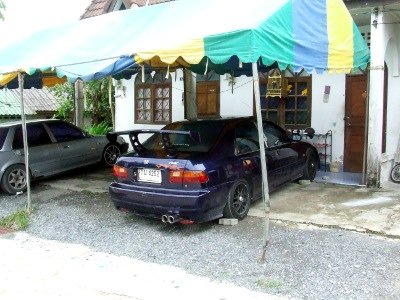 PHUKET: A young mother is contemplating her future after her partner and the father of her two children was gunned down outside their rented room in Phuket on Sunday night.

“I was watching television with our two children at about 10pm when I heard two loud blasts. I rushed outside and saw my husband lying on the cement, covered with blood,” Kesinee Hoksad told the Phuket Gazette this morning.

Ms Kesinee, 27, explained that Preecha Tengkiang, 31, was shot while he and a friend were working on a car in front of their rented room in Soi Pattana.

Mr Preecha was a mechanic, often buying cars to repair and resell as a way of making a living, she explained.

“Preecha was checking the stereo inside the car while his friend was fixing the engine. He was shot when he got out of the car.

“He died instantly, with eight bullet holes in his back and another in the back of his head,” said Ms Kesinee.

A neighbor called the Kusoldham Rescue Foundation, who arrived quickly and rushed Mr Preecha to Vachira Phuket Hospital in Phuket Town, where he was pronounced dead on arrival.

“My husband’s friend did not see who opened fire because he was fixing the engine and the hood blocked his view [into the car]. He said that sound of the gunfire came from across the street, which is overgrown with grass,” said Ms Kesinee.

Police believe the murder weapon was a shotgun pistol.

However, Ms Kesinee found it difficult to believe that either could be the true motive for Mr Preecha’s murder.

“I have no idea why anyone would want to kill him. He never said anything about having enemies and he never even mentioned drugs,” she said.

Ms Kesinee will leave Phuket on Saturday with her parents and her children, aged 8 and 9, to attend the funeral.

“I cannot go earlier because I have to work and take care of the children,” she said.

Use of force “necessary’ in Phuket beach eviction: Police