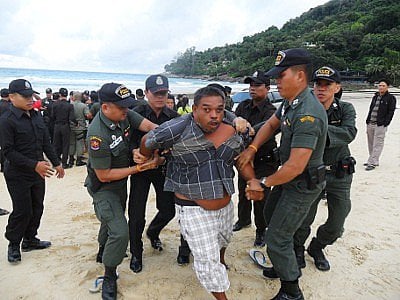 PHUKET: Local police have defended their use of force in removing vendors from a Phuket beach on Sunday, saying that the officers present did only what was needed to arrest the ringleader.

Tensions flared when police and municipal officers staged a dawn raid to tear down three restaurants deemed to be encroaching on government land at Karon Beach.

The three restaurants, located directly in front of the Centara Grand Beach Resort, were run by brothers Nawin, Daeng and Lek, who say they have been operating restaurants on the beach for the past 26 years.

“The tents and kitchen of my restaurant were the first to go,” said Mr Lek, the youngest of the brothers.

“Nobody spoke to us. The first thing that happened was that [Phuket Provincial Police] Commander Pekad Tantipong ordered officers to remove our stuff. They took only about one hour to pull it down,” he added.

Mr Lek explained that local residents and family members formed a circle around the three brothers to stop police from removing them.

“The officers surrounded us, then they pulled the others out of the way so they could get to us,” said brother Daeng.

“They used force. I was punched in the neck,” said Mr Lek.

Click here to view footage of the clash recorded by people standing by.

However, Chalong Police Deputy Superintendent Narong Laksanawimon told the Phuket Gazette yesterday that any force used in removing the brothers was necessary.

The trouble started when other beach restaurant operators tried to stop officials from pulling down the restaurants, and then blocked officers from removing the brothers from the beach, he said.

“If we had let them stay, they might have obstructed officials from doing their duty in removing the restaurants.

“We surrounded them to stop them from entering the removal area and in the end we needed to physically remove them because we needed to take them to the police station,” Lt Col Narong said.

Mr Nawin was charged with encroaching on public land and obstructing officials from doing their duty, the policeman said.

For a full report, see the next issue of the Phuket Gazette, due out Friday afternoon.