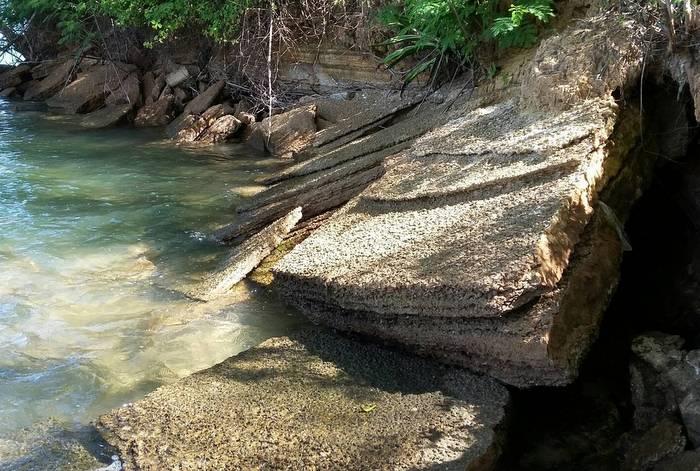 KRABI: Geologists are seeking a solution to preserve one of Thailand’s largest fossil sites, after it was damaged by monsoon waves.

Naturally-formed slabs of fossilized shells, believed to be about 75 million years old, at Fossil Shell Beach – locally known as ‘Susan Hoi’ – have broken off recently.

The beachfront site in Noppharat Thara – Mu Ko Phi Phi National Park is the largest in the country and has been pounded by rough monsoon weather in recent weeks.

Pleanprasob Khaonuan of the Noppharat Thara – Mu Ko Phi Phi National Park said that this was not the first time that the fossil plate has been damaged, but National Park officers are still working on a way to preserve the site.

“At this stage, we have yet to find a solution,” Mr Pleanprasob said. “We have been requesting an increased budget in order to build a wall that would protect the area. However, our request has never been considered, as it would cost about 400 million baht,” he said.

Mr Pleanprasob said that the site is currently considered as an ancient fossil site by the Department of Mineral Resources (DMR), which may allow for additional funding of the proposed sea barrier.

“The shell field covers a 2km-stretch along the Krabi coastline. It is a very important ancient site which is the only one in Thailand. It’s probably the only such site like it in the world, and it’s in critical condition now,” said Thanyathorn Thonrat of the DMR.

“We will bring the issue up to the board, in order to find a solution as soon as possible. Registering Susan Hoi as a fossil site is the best solution we can think of. However, it could take up to a year to get approval,” she added.