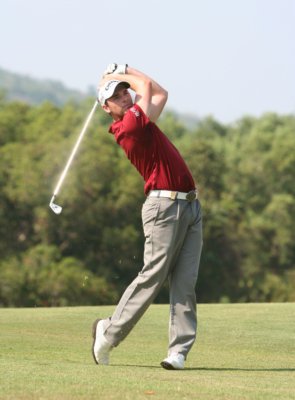 PHUKET: In a late charge this afternoon, South African Richard Sterne finished 13 under par to head the leaderboard going into final day of play in the Johnnie Walker Classic 2007 tomorrow.

Yesterday’s leaders, Oliver Wilson from the UK and South African Anton Haig were put to a series of challenges throughout the day. The first challenge came from another experienced South African, Retief Goosen, as he birdied holes 2, 3 and 4 to move to -11 for the tournament.

The long-hitting Haig and the cool Wilson responded. Haig made three birdies turn in 34 for the front nine, while Wilson made birdies at holes 3, 5 and 6 for a 33 front nine for -12 overall.

Goosen was at odds in the hot sun. He finished with six birdies, six pars and six bogeys for a par 72 to finish at -8. The Blue Canyon Country Club course is providing many birdies and bogeys again, proving its championship status.

Haig and Wilson continued their solid play. Haig was hitting the ball so far down the fairways that he was making the game look easy. His solid back nine of 36 gave him a respectable 70 (-2) to leave him -11 for the tournament.

Wilson had many chances for birdies but had to settle for 70 for the day and -12 overall. Both young players were great to watch and look like great prospects for tomorrow’s play.

Richard Lee also continued his good form on a course he favors, with a solid 70 on the day to finish at -9.

The big names also entertained the crowd. Favorite Ernie Els returned a bogey-free 67 to finish at -6, Colin Montgomerie finished with two birdies to move to -7. Liang Wen-Chong of China shot 67 to give himself a chance at -7 and Aussie Adam Scott, perhaps a little too far back, sits at -3.

With the top three players all within one shot and the experienced players making their move late in the tournament, tomorrow’s final round of play has the potential to be a nail-biter.