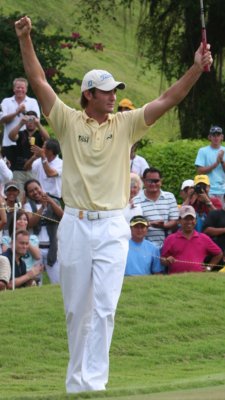 Haig’s sudden-death playoff victory over Oliver Wilson and Richard Sterne was spectacular as he birdied the 18th hole in regular play and followed up with a birdie in the playoff to take away the US$404,993 (13.9 million baht) first prize.

The challenge from the big names failed to materialize in the last day of play; Retief Goosen shot 70 (-2) for a total of -10 while Colin Montgomerie closed with another under-par round of 71 to finish on -8.

Following his poor second round, Canadian Mike Weir was impressive with 68 and 67 over the weekend to finish in fifth place with -9.

The spectators were treated to some great golf today when Haig and his long hitting produced a key shot under pressure on the par-4 13th. There were roars from the crowd as he hit his tee shot over the pin to 10ft, setting up a great birdie and a grandstand finish.

The challenging par 3s at the Blue Canyon Country Club course played a part in the drama. Both Haig and Stern bogeyed the difficult 17th, and a par from Wilson made the 18th very exciting for the growing Phuket crowd.

The course record was equaled again, for the fourth time in the tournament, with Indian Gaurav Ghei shooting 64, which included an eagle on the 1st.