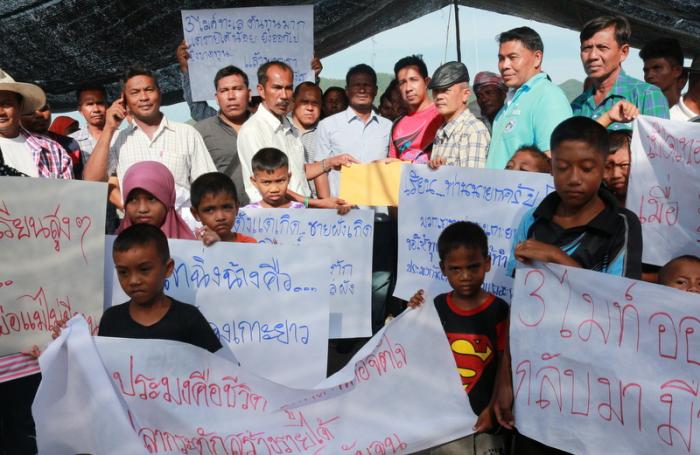 PHANG NGA: More than 300 anchovy fishermen, claiming loss of income following the introduction of new regulations established by the Ministry of Agriculture and Cooperatives, gathered in protest at Laem Mai pier at Koh Yao Noi on Thursday.

Led by spokesperson Tiwakorn Thongkert, the fishermen demand changes to regulations which prevent vessels weighing 10 tons or more from fishing within three miles of the shore.

“About 30 boats are affected by the regulations. Anchovy are usually found close to the shore. The fish can be found outside the three-mile exclusion zone but those catches are so small it is not worth the fishermen’s time and expense,” said Mr Tiwakorn.

The fishermen have been losing out since the three-mile zone was introduced about a month ago, so we want the boundary to be reduced from three miles to 1.5 miles,” he added.

Koh Yao district chief Buri Thammarak met with the protestors and accepted a letter outlining their demands to be passed on to the Ministry of Agriculture and Cooperatives.

He said he sympathized with the fishermen’s plight and promised that their issues would be addressed by the Ministry of Agriculture and Cooperatives deputy minister, Narong Pipatchai, who is scheduled to visit the island on May 11.

“The fishermen have no income now. They cannot wait any longer. We have asked officials several times to look into this and other issues, but nothing ever happens,” said Mr Tiwakorn.

Mr Tiwakorn explained that the fishermen use large boats as it was much more cost-effective than using several smaller boats for the same task.

“If we use small boats, we have to use two vessels; one for fishing and the other for boiling the fish, so it’s better to use one large boat that can do both these things,” said Mr Tiwakorn.

Mr Buri said local officials have met many times to resolve the issue on a provincial level, but added that his hands were tied.

“Even though we understand and agree with the fishermen’s demands, we still need approval from the central government before making any changes,” said Mr Buri.

Alex Face unfazed by the controversy surrounding his painting