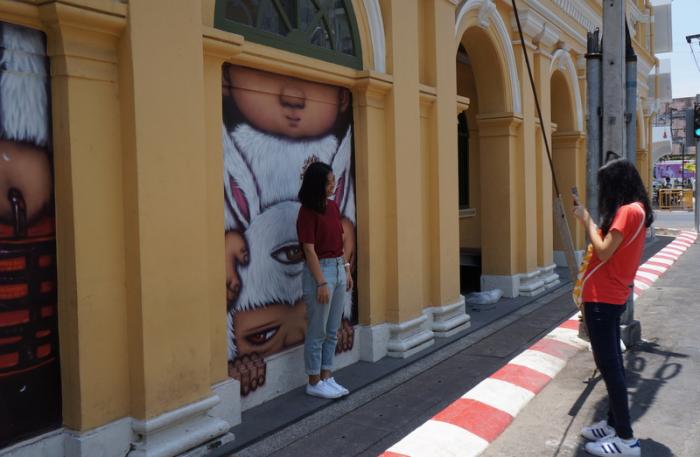 PHUKET: Alex Face, the artist who painted the controversial mural depicting a three-eyed child on a wall of one of the city’s most historic buildings, the Peranakan Nitat (Baba) Museum in Phuket Town, is set to remove the artwork today.

The Thai artist, whose given name is Patcharapol Tangruen, has been commissioned to paint buildings all over the world, but this is the first time, to his knowledge, that one of his murals has had to be removed.

He agreed to remove the mural himself amid public outcry following its unveiling on April 10. Through social media, residents criticized the artwork’s placement at what was formerly the Chartered Bank, the only international bank in Phuket and a marker of the island’s period of industrialization.

Criticism of the project was also leveled at municipality support for the project through an engagement organization called So Phuket.

Old Phuket Town Community president Don Limnunthaphisit said that community members were shocked to see the painting appear on one of the city’s most historic buildings.

“The core of this problem is that people are questioning why modern art is painted on the side of a 100-year-old building. It’s simply in the wrong place. It’s like forcing a 100-year-old person to get a tattoo. I am personally not against the art. I’m glad people enjoy taking photos with it and would have suggested that it stay there for another three months so people could enjoy it before it’s removed” said Mr Don.

“However, the authorities have made their decision so I’m fine with that,” he added.

The mural was initially approved by Phuket City Deputy Mayor Kosol Tang-Uthai. During a highly charged debate at Phuket City Hall, chaired by Phuket City Mayor Somjai Suwansupana on April 12, Dr Kosol, who is also the former president of the Thai Peranakan Association, admitted that although he backed the plan to paint parts of the old town, he was unaware that a mural would be painted on the museum wall and offered to hand in his resignation over the ‘miscommunication’.

Alex was unruffled by controversy and said he was happy to remove the art himself.

“I have been working in this field for more than 10 years and in that time I have seen a lot of things, good and bad. Sometimes people who disagree with my work chase me away even before it’s finished,” he said.

“I understand the issue here in Phuket. I have no problem removing my art, but what I do not quite understand is why the authority and other relevant people did not talk before it became an issue,” he noted.

He said he planned to make the removal of the mural another piece of artwork in its own right by making a stop-motion movie. However, he did not reveal how he planned to remove it.

“I spent a lot of time researching Phuket culture. I always study the places where I will work. In this case, I’d say I have done my job. The issue is among others, not me,” said Alex.

“I will say that working in Phuket has been one of my most impressionable experiences. The art did its job. It forced people to talk and resolve issues.