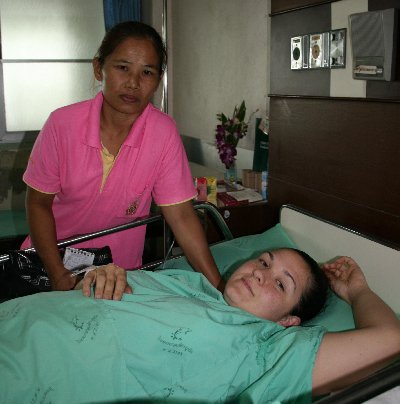 PHUKET: An American tourist who broke her back in a cliff diving accident on Phi Phi last week, was taken to the ferry in a wheelbarrow after doctors at the local hospital were unable to diagnose her condition.

Melissa Kelman, 28, from St Louis, Missouri, made it back to Phuket where an X-ray revealed she had shattered three vertebrae in her spine.

She underwent major spinal surgery and is still recovering in Phuket International Hospital.

The dance teacher, who now lives in South Korea, said she and a friend had booked a sightseeing tour on Phi Phi with a sunset cliff jump as the finale.

When it came time for the jump, the pair climbed a rope ladder up to the 20-metre high cliff top, where they were told the only way down was to jump into the water below.

“It was too dangerous to climb back down over the sharp rocks,” she said.

Melissa jumped, hitting the water hard, and when she surfaced, she knew she was in trouble.

“I couldn’t breathe properly and all I could do was whisper ‘my back, my back’,” she said.

“One of the guys on the boat could see I was in trouble and dived in to save me.”

Melissa was taken to Phi Phi Hospital, but without X-ray equipment, doctors there were unable to diagnose her properly, and she was allowed to leave.

Because there are no cars on Phi Phi, she was taken back to her hotel in a motorcycle side car, and the next morning she was loaded onto a wheelbarrow and taken to the ferry wharf where she caught a boat back to Phuket.

She spent the one-hour boat trip lying on the floor of the ferry.

When she arrived in Phuket, she was taken to Bangkok Phuket Hospital where she planned to buy painkillers before flying home to South Korea.

Doctors X-rayed her spine and found she had three crushed and splintered vertebrae.

Melissa was transferred to Phuket International Hospital on Tuesday where surgeons fused the three vertebrae.

She will have to wear a full body brace for at least the next five months.

Melissa is now seeking legal advice to pursue damages against the Phi Phi-based tour operator that runs the sightseeing and cliff jump tour.

Her hospital bill so far is in excess of 300,000 baht or (USD 9,000) and Melissa said her South Korean health insurance plan will not cover her medical expenses in Thailand.