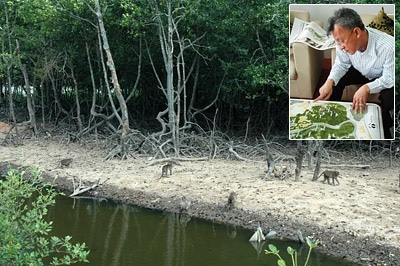 PHUKET: Rassada Municipality is seeking a large central government budget for three tourism development projects in and around the ‘monkey viewpoint’ area on Srisuthat Road.

Rassada Mayor Surathin Lianudom said the work, if approved, would include a network of boardwalks through mangrove forest, renovation of the Mali Kaew Dam and Wat Phranon, as well as the construction of a gymnasium, health park, restaurants and car park.

The project would cover 200 rai in total.

Describing the proposed work as his ‘dream project’, Mayor Surathin said the project would cost about 70 to 80 million baht and could be finished early next year, if approval comes soon.

The project would beautify the low-lying area along Klong Tha Chine that separates Koh Sireh and Phuket City.

The area, currently home to a colony of about 100 crab-eating macaques, has long been a point of interest to passers-by.

“In the past, Koh Sireh has not been attractive for tourists because it is dirty and unorganized, but our new project will ensure the island is viewed as a major selling point for the Phuket tourist market,” he said.

The development would be designed as an ‘eco-tourism’ project, minimizing damage to the extensive mangrove forests along the banks of Klong Ta Chine, he said.

The project would also have to be approved by the Ministry of Natural Resources and Environment and the Royal Thai Forest Department, which is responsible for conservation of the island’s fast disappearing mangrove forest reserves.

Tsunami warning buoy for Phuket now dead in the water