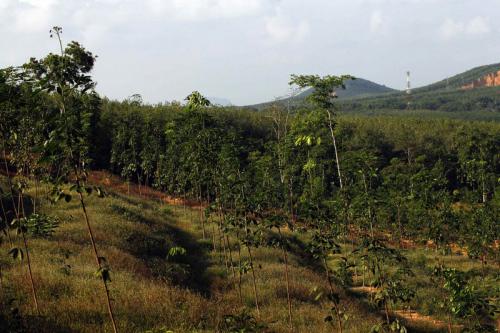 PHUKET: One afternoon in October, in the watery no-man’s land between Thailand and Myanmar, well-known to Phuket visa-runners, Muhammad Ismail vanished.

Thai immigration officials said he was being deported to Myanmar. In fact, they sold Ismail, 23, and hundreds of other Rohingya to human traffickers, who then spirited them into brutal jungle camps.

As thousands of Rohingya flee Myanmar to escape religious persecution often washing ashore in Phang Nga, Phuket and other provinces along the Andaman coast (story here), a Reuters investigation in three countries has uncovered a clandestine policy to remove Rohingya refugees from Thailand’s immigration detention centers and deliver them to human traffickers waiting at sea.

The Rohingya are then transported across southern Thailand and held hostage in a series of camps hidden near the border with Malaysia until relatives pay thousands of dollars to release them (story here). Reporters located three such camps – two based on the testimony of Rohingya held there, and a third by trekking to the site, heavily guarded, near a village called Baan Klong Tor.

Thousands of Rohingya have passed through this tropical gulag. An untold number have died there. Some have been murdered by camp guards or have perished from dehydration or disease, survivors said in interviews.

The Thai authorities say the movement of Rohingya through their country doesn’t amount to human trafficking. But in interviews for this story, the Thai Royal Police acknowledged, for the first time, a covert policy called “option two” that relies upon established human-smuggling networks to rid Thailand of Rohingya detainees.

Ismail was one of five Rohingya who said that Thai immigration officials had sold him outright or aided in their sale to human traffickers. “It seemed so official at first,” said Ismail, a wiry farmer with a long narrow face and tight curly hair. “They took our photographs. They took our fingerprints. And then once in the boats, about 20 minutes out at sea, we were told we had been sold.”

Ismail said he ended up in a camp in southern Thailand. So did Bozor Mohamed, a Rohingya whose frail body makes him seem younger than his 21 years. The camp was guarded by men with guns and clubs, said Mohamed, and at least one person died every day due to dehydration or disease.

“I used to be a strong man,” the former rice farmer said in an interview, as he massaged his withered legs.

Mohamed and others say they endured hunger, filth and multiple beatings. Mohamed’s elbow and back are scarred from what he said were beatings administered by his captors in Thailand while he telephoned his brother-in-law in Malaysia, begging him to pay the about 6,200 baht ransom they demanded. Some men failed to find a benefactor in Malaysia to pay their ransom. The camp became their home. “They had long beards and their hair was so long, down to the middle of their backs, that they looked liked women,” said Mohamed.

What ultimately happens to Rohingya who can’t buy their freedom remains unclear. A Thai-based smuggler said some are sold to shipping companies and farms as manual laborers for 5,000 to 50,000 baht each.

“Prices vary according to their skills,” said the smuggler, who spoke on condition of anonymity.

The Arakan Project, a Rohingya advocacy group based in Thailand, says it has interviewed scores of Rohingya who have passed through the Thai camps and into Malaysia. Many Rohingya who can’t pay end up as cooks or guards at the camps, said Chris Lewa, Arakan Project’s director.

Presented with the findings of this report, Thailand’s second-highest-ranking policeman made some startling admissions. Thai officials might have profited from Rohingya smuggling in the past, said Police Maj-Gen Chatchawal Suksomjit, Deputy Commissioner General of the Royal Thai Police. He also confirmed the existence of illegal camps in southern Thailand, which he called “holding bays”.

Tarit Pengdith, chief of the Department of Special Investigation (DSI) was also asked about the camps Reuters discovered. “We have heard about these camps in southern Thailand,” he said, “but we are not investigating this issue.”

Besieged by a political crisis and violent street protests this week, Thailand faces difficult questions about its future and global status. Among those is whether it will join North Korea, the Central African Republic and Iran among the world’s worst offenders in fighting human trafficking.

The signs are not good (story here).

The US State Department’s annual Trafficking In Persons (TIP) report ranks countries on their record for combating the crime. For the past four years, Thailand has sat on the TIP Report’s so-called Tier 2 Watch List, the second-lowest rank. It will be automatically downgraded to Tier 3 next year unless it makes what the State Department calls “significant efforts” to eliminate human trafficking.

Dropping to Tier 3 status theoretically carries the threat of U.S. sanctions. In practice, the United States is unlikely to sanction Thailand, one of its oldest treaty allies in Asia. But to be downgraded would be a major embarrassment to Thailand, which is now lobbying hard for a non-permanent position on the United Nations Security Council.

Rohingya are Muslims from Myanmar and Bangladesh, where they are usually stateless and despised as illegal immigrants. In 2012, two eruptions of violence between Rohingyas and majority Buddhists in Rakhine State in western Myanmar killed at least 192 people and made 140,000 homeless. Most were Rohingya, who live in wretched camps or under apartheid-like segregation with little access to healthcare, schools or jobs.

And so they have fled Myanmar by sea in unprecedented numbers over the past year. Ismail and Mohamed joined tens of thousands of Rohingya in one of the biggest movements of boat people since the end of the Vietnam War.

Widespread bias against the Rohingya in the region, however, makes it difficult for them to find safe haven – and easy to fall into the hands of traffickers. “No one is there to speak for them,” says Phil Robertson, deputy director for Asia at Human Rights Watch. “They are a lost people.”

Rohingya men, women and children squeeze aboard overloaded fishing boats and cargo ships to cross the Bay of Bengal. Their desired destination is Malaysia, a Muslim-majority country where at least 31,000 Rohingya already live. As Reuters reported in July, many of these refugees were waylaid in Thailand, where the Thai navy and marine police worked with smugglers to extract money for their onward trip to Malaysia.

Hundreds of Rohingyas were arrested in two headline-grabbing raids by the Thai authorities on January 9 in the towns of Padang Besar and Sadao, both near the Malaysia border. At the time, Colonel Krissakorn Paleetunyawong, deputy commander of police in the area, declared the Rohingya would be deported back to Myanmar. That never happened.

Ismail and Mohamed were among the 393 Rohingya that Thai police say were arrested that day in Padang Besar. So was Ismail’s friend Ediris, 22. The three young men all hailed from Buthedaung, a poor township in northern Rakhine State.