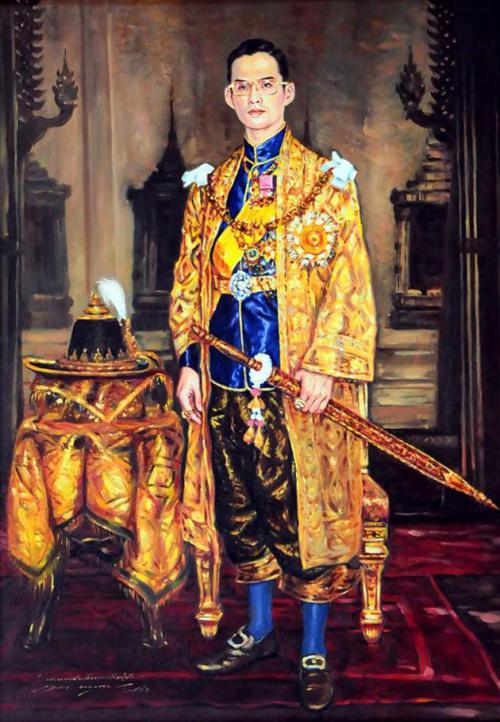 A huge number of the much-revered monarch’s well-wishers are expected to crowd the streets to express their continued deep loyalty to him. This year, Thais’ overwhelming respect for HM The King has caught the world’s spotlight, as even the serious confrontations between anti-government demonstrators and the Yingluck Shinawatra-led administration have come to a halt especially for this important occasion.

Both sides are now busy organizing events to honor the much-beloved King.

His Majesty, accompanied by Her Majesty Queen Sirikit, will make a public appearance at the Rajapracha Samakhom Pavilion of Klai Kangwon Palace at 10:30am today.

His Majesty’s public appearance will be televised.

Many giant screens are now installed at various spots in Prachuap Khiri Khan’s Hua Hin district, as an enormous number of people are expected to turn out in full force today to celebrate His Majesty’s birthday.

Many people have been occupying the footpath along Phet Kasem Road in front of the Klai Kangwon Palace since yesterday. Nattakan Sittikham, a Nonthaburi resident, said she had staked her claim to a space on the footpath yesterday morning.

“I have come here to honor my much-beloved King. I love him so much because he is so devoted to his country and his people,” said the 60-year-old woman.

Pattarin Obchoey, 44, said that she, her family members and friends had travelled from as far away as Nakhon Pathom because they wished to express their loyalty to the King.

“We needed to come early because we were worried that all the space would be quickly occupied,” she said yesterday.

Prachuap Khiri Khan Governor Weera Sriwathamatrakoon said that a portion of the road would be closed to traffic from 3am today to ensure there was more space for well-wishers.

“It should be able to accommodate tens of thousands of people,” he said.

This will be the first time His Majesty has granted a grand public audience from Klai Kangwon Palace. Light decorations and decorative plants are adorning the area.

Democrat Party leader Abhisit Vejjajiva said the respite between the government and the anti-government demonstrators was solid proof that the monarchy was truly Thailand’s unifying force.

Yingluck said the anti-government protesters planned to hold an event in honor of His Majesty at Government House. She said she would lead the candle-lit ceremony in honor of the HM The King at Sanam Luang, which will start shortly after 7pm tonight.

Several heads of state have already sent their best wishes to His Majesty on the occasion of his birthday. Among them are Britain’s Queen Elizabeth II and US President Barack Obama.

A total of 263 people were wounded and four killed in the Bangkok protest sites over the past three days.

Thanpuying Ravijitr Suwanbubpa, Her Majesty’s assistant private secretary, said that the Princess was concerned that people had been hurt during the street protest and hence, has provided necessities and other items for those being treated at Ramathibhodi Hospital.

She said the Princess also would take responsibility for any of the patients’ medical expenses not covered by the hospital.

As of 2pm yesterday, Public Health Ministry permanent-secretary Narong Sahametapat said that 86 of the 263 injured had been admitted to hospitals in Bangkok since Friday.

The death toll from Saturday night’s skirmishes in Ramkhamhaeng University rose to four, as Private Thanasit Wiangkham, 22, succumbed to his injuries yesterday morning.

Colonel Peerapol Pokpong, director of Phra Mongkutklao Hospital’s Emergency Department, said that Mr Thanasit’s brain had stopped functioning as soon as he was hit by a 9mm bullet in the head at 3am on Sunday.

The Public Health Ministry reported that yesterday seven protesters were hospitalized for tear gas injuries, but six of them were discharged soon after.

The seventh protester remained at Ramathibodi Hospital, as his eyes were bleeding.

According to the ministry, 129 protesters were injured in clashes on Monday, and 76 of them suffered injuries from tear gas.

Nineteen protesters reportedly had gunshot wounds – three of them as a result of live bullets.

Twelve of them sustained injuries in the clash at Ramkhamhaeng University on Saturday night, while eight were victims of tear gas fired at Chamai Maruchet Bridge.

Public Health Minister Pradith Sinthawanarong yesterday visited the injured at both Rajvithi and Ramathibodi hospitals and said the government was deeply sorry.

“Prime Minister Yingluck Shinawatra wants to express her sincere apologies for the injuries, as the government wanted the political turmoil to end peacefully,” he said.

PHUKET: Media outlets worldwide have reported on the temporary truce between the anti-government protesters and the police that began on Tuesday.

Some admitted that the police’s decision to clear the barriers and pull back was a surprise, but they all saw this as an attempt to defuse the political tension ahead of His Majesty King Bhumibol Adulyadej’s 86th birthday today.

CNN and BBC said the atmosphere changed massively after the police withdrew.

The battle zone “has suddenly turned into something a bit like a family picnic”, said Jonathan Head, a BBC correspondent.

CNN described it as more of a carnival atmosphere, with flowers, water bottles and hugs being exchanged between the police and protesters.

The Guardian, and Singapore’s Channel News Asia and the Straits Times, said this response was likely in preparation for HM The King’s birthday. They quoted the National Security Council chief, Paradorn Pattanatabut: “There’s a mutual understanding that everything must be calm and orderly on this auspicious day.”

Britain’s The Telegraph suspected that a backroom deal may have been involved in securing the peace.

However, all media outlets are