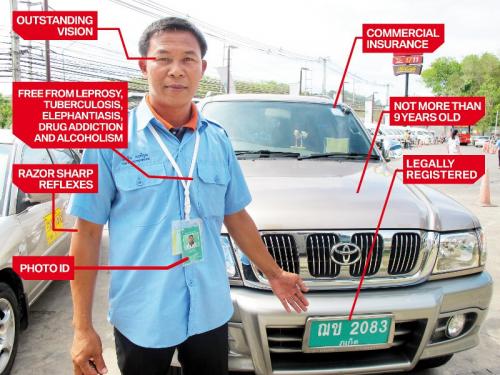 The Department of Special Investigation (DSI) has opened an ‘Organized Crime Center’ [sic] at Phuket International Airport to crack down on illegal taxi drivers still operating there. The move follows widespread allegations of mafia operating on the island and illegal taxi drivers overcharging tourists. Here, the Phuket Gazette investigates what it takes to become a Phuket taxi driver.

PHUKET: There are currently 2,110 taxis legally registered to operate in Phuket; 129 of those are metered taxis. However, almost 1,000 more drivers continue to work illegally on the island, gleaning profit from freshly arrived tourists, often through outright gouging.

During the crackdown earlier this year, the Phuket Land Transport Office (PLTO) identified 2,882 illegal taxis in Phuket. The crackdown inspired a further 1,981 taxi drivers to apply to have their vehicles registered.

However, that means at least 900 taxi drivers are operating without having made any attempt to become legal (story here).

“This is despite us granting them amnesty and helping them by negotiating with finance companies, banks and insurance companies to reduce the costs of re-registering their vehicles as private taxis in order to become legal drivers,” Mr Jaturong said.

Although the amnesty ended on April 30, drivers can still apply to register their vehicles as taxis and apply for their taxi drivers’ licenses, he added.

Along with the carrot came the stick. On May 1, police and PLTO officers were called upon to fine all drivers caught for “illegally operating a vehicle as a taxi”. The fine levied was the flat maximum 2,000 baht for each infringement.

The enforcement enjoyed limited success. Phuket Provincial Police confirmed to the Gazette that across the island 170 drivers were each fined 2,000 baht in April for not applying to register their vehicles as taxis, while their counterparts who were still illegally operating taxis but who had applied to become legal, were let free.

However, the penalty is no stiffer for repeat offenders. “We do not have stronger penalties for drivers who repeatedly break the law. So far, the fine is 2,000 baht every time they are caught,” Mr Jaturong said.

Regardless of whether a taxi is fitted with a meter or not, the engine size must not be less than 1600cc. “It doesn’t matter which make or model of car it is, and there is no restriction on the maximum size of the engine,” Mr Jaturong explained.

Furthermore, there is no such thing as an independent taxi driver in Phuket. The car must be registered as working for a legally registered organization.

“This is a nationwide regulation so that the driver of each taxi can be identified and reached in case he does something wrong,” Mr Jaturong explained.

“The person registering the taxi must provide evidence that he works for a formal organization. He can provide a signed agreement proving he works as part of a taxi co-operative, or an employment contract showing he works for a tourism business, such as a tour kiosk, or for some other form of legal entity,” he added.

Regardless, so-called “taxi groups” are not held accountable for their members’ actions, even if their members consistently break the law.

“If their drivers are involved in a crime, charges will be pressed against the driver, not the group,” Mr Jaturong said.

“If there are complaints against a driver, the group will resolve the issue themselves. They have their own rules to punish drivers, such as suspending the drivers from work. The number of days’ suspension – and hence lost income – will depend on what the drivers have done wrong,” he assured.

In order to carry passengers in a taxi, drivers must be Thai nationals, as ferrying passengers is a job prohibited to foreigners under the Alien Workers Act.

Applicants must provide a medical certificate affirming they are free from leprosy, tuberculosis, elephantiasis, drug addiction and alcoholism.

And they must pass a test which takes place over a two-day period at the PLTO, during which applicants receive training in traffic law, basic English language, polite manners and common courtesy, Mr Konlayut said.

They also undergo an eyesight and reflex test.

As part of the process, police conduct a background check.

“Any applicants found to have served jail time for any crime will be rejected,” Mr Konlayut assured.

“However, repeat offenders, even for traffic offenses such as reckless driving, will be issued a license to drive a taxi in Phuket so long as they have not served a day in prison,” he added.

Once issued their license, on its large yellow card, the drivers must have it on display at all times while driving the taxi.

Every vehicle being registered as a taxi must first have at least basic commercial insurance coverage, as stipulated by the national Office of Insurance Commission, before the PLTO will process its application.

The high cost of commercial insurance has been an ongoing point of dispute among many illegal taxi drivers in Phuket, who claim they cannot afford the rates.

To make insurance coverage more affordable, the PLTO directly engaged in negotiations with finance companies, banks and insurance companies on behalf of the drivers. The result, after months of talks, was base policies starting at about 30,000 baht per annum.

“We know it can be expensive, but we have done the best we can – and this is a mandatory requirement for a vehicle to be registered as a taxi,” Mr Jaturong confirmed.

Yet Patong Police Traffic Inspector Ekkarat Plaiduang confirmed to the Gazette that his officers would not pursue charges against any driver found driving without the required insurance.

“Instead, we will report it to the insurance company and let them decide whether they want to file a complaint,’ Maj Ekkarat explained.

“If they do, we will charge not the driver. but the owner of the car with providing false information on an official document. The penalty for that is a fine of up to 60,000 baht or up to three years in prison, or both,” he said.

Maj Ekkarat did not elaborate on what action police would take in case passengers, including tourists, are injured in an accident involving a taxi with inadequate insurance coverage.

The ultimate goal of nearly every taxi driver on the island is to serve Phuket International Airport, which Chanchai Doungjit, chief of the Tourism Authority of Thailand (TAT) Phuket office, last month reported was the primary tourist gateway on an island that attracts about 11 million visitors per year.

Tourists pump an estimated 200 billion baht into the local economy, said Mr Chanchai. The consequence is that, for many taxi drivers in Phuket, the airport represents an easy avenue to hard cash.

To legally serve the airport, however, drivers must work for one of the taxi co-operatives that have signe