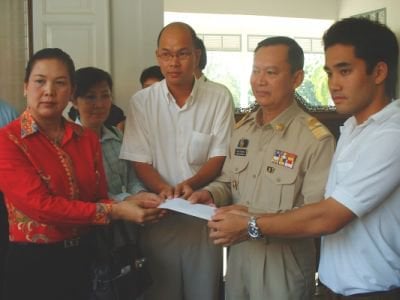 PHUKET CITY: Pakin Raktae-Ngam, Chaiman of the Phuket Spa Business Club, today lashed out at the 10% excise tax levied on spas, saying that if his spa is forced to pay the tax, he would register it as a massage parlor.

K. Pakin’s strong comments were made at a protest against the tax by some 200 owners and managers of spa businesses from Phuket, Krabi, Phang Nga and Koh Samui, at the Phuket Provincial Health Office (PPHO).

K. Pakin explained that the protest was organized after Excise Department officers raided the Baan Sukhothai Hotel And Spa, in Patong, yesterday.

Baan Sukhotai Resident Manager Siraphop Srakaew told the Gazette, “The officers checked the spa’s accounts and told me to sign a declaration that I understood that spas were classified by the government as entertainment venues, and were therefore subject to 10% excise tax.”

K. Pakin said, “The 10% excise tax on spas is unfair because spas are one of three businesses that the government supports as part of its plan to develop Thailand into the ‘Health Capital of Asia’.”

He added that he considered spas to be as much a part of the health industry as hospitals and producers of herbal remedies, which are not required to pay 10% excise tax.

“Spas are different from ordinary massage parlors; spas aim to improve their customers’ health, and they do not sell sex,” he said.

He added that the members of all four spa associations stood united and would not pay the excise tax until they had received a clear answer from the Ministry of Finance and the Ministry of Public Health defining the differences between a spa and a massage parlor.

“If they decide that spas must pay 10% excise tax, then I shall register my spa as an ordinary massage parlor,” he said, alluding to the fact that opening a massage parlor requires far less red tape than opening a spa.

At the protest, K. Pakin and the presidents of the other three spa associations handed a petition to PPHO Chief Dr Wanchai Sattayawuthipong and Supatra Horsrisumpun, the Chief of the Phuket Area Excise Office, calling for the two departments to agree to a common definition of a spa.

A copy of the petition was also handed to Vice-Governor Niran Kalayanamit, who was asked for his help in resolving the issue.

V/Gov Niran said that he understood the problem very well, adding that he would meet with K. Supatra and Dr Wanchai on Tuesday next week to discuss the problem.

Move to open up historic arcades