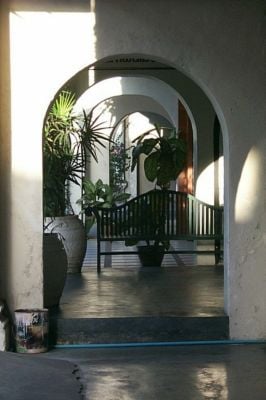 PHUKET CITY: Residents of Thalang Road, in the old part of Phuket City, have been asked to consider opening up the Ngo Kha Khee arcades in front of their historic Sino-Portuguese houses for use as public walkways.

Around 20 residents attended a meeting of the Old Phuket Foundation on Sunday at Thai Hua Phuket School, Thalang Rd to hear about the proposal.

The President of the foundation, Ayoot Thansiriroj, who is also Deputy Mayor of Phuket City, told the Gazette that the purpose of the meeting was to tell residents what the proposal could mean for them, and to hear their opinions.

He said at least three house owners had agreed to open their arcades to the public, and added that the foundation would ask Governor Usdomsak Usawarangkura officially to open the arcades on HM the King’s Birthday on December 5.

He added that the foundation would pay any costs incurred by homeowners in opening up their arcades.

He continued, “More and more houses have been closing their arcades or putting up railings. We want to open up the arcades gradually, with the cooperation of the house owners.

“If we have the Ngo Kha Khee back, it will be good for the public, because they can walk in the shade when it is sunny and be sheltered on rainy days.

“Chances are that [with the arcades open] more people would come to see these old-style buildings in Phuket City.”

However, he admitted, “The buildings are private property, so we can’t force the owners to cooperate.”