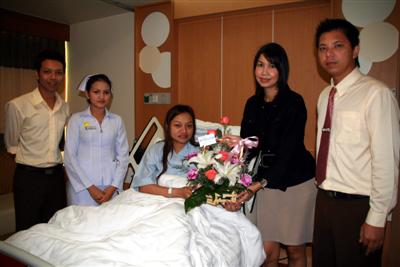 PHUKET CITY: Southern Thai country singer Jeab Benjaporn is recovering in Bangkok Phuket Hospital today after being injured in a road accident in Phang Nga last night while on her way to Phuket to give a concert.

The popular 29-year-old singer was traveling through Thap Put District when a dog darted in front of the car she was in, which was being driven by her manager Wanchai Promsuban.

Conditions were wet and the car skidded off the road when the driver tried to avoid the dog.

Jeab, who was not wearing a seatbelt at the time, suffered a broken collarbone and injuries to her teeth and gums. She was taken to Bangkok Phuket Hospital, where doctors say is recovering nicely.

Her fractured collarbone, which does not require surgery, will be treated with a shoulder stabilizing brace, he said.

Jeab is best known for the song “Sator Plad Thin” (“transplanted stink bean”), a moving ballad about homesickness for the south after living outside the region.

She had just attended a friend’s wedding in her native Surat Thani when the accident occurred.

After her release, Jeap will recover at her home in Surat Thani before traveling to Trang to give a Mothers’ Day concert in Trang on August 12.