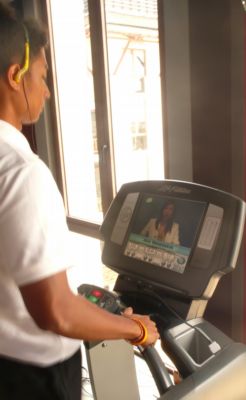 PHUKET: After recently extending its network from local provincial cable and the Web, where PGTV appears as Number One in Google under the prime search term “Phuket Television”, the Phuket Gazette’s daily English-language television content has now been added in healthy doses to all patient rooms at Phuket International Hospital, and to the 15-inch touch-screen monitors on all of the RPM Health Club’s ‘Elevation’ series training machines.

“As a result [of the change in regulations], we expect to see a significant increase not only in the volume of programs available on the local market, but also in program quality,” said Marc Mulloy, Executive Producer of PGTV. “So we continue to invest heavily in production staff and in technology, in the belief that Phuket is a high-potential emerging market for English-language television.”

Following the longstanding policy of the Phuket Gazette newspaper, PGTV’s content is chosen on the basis of its perceived level of interest to viewers.

For viewers outside of Phuket, PGTV, which is focused heavily on local news and events, is available here.