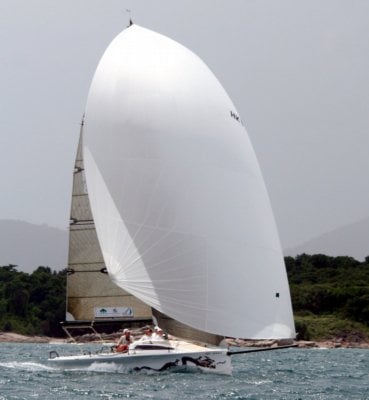 AO CHALONG: After four days of racing in and around Chalong Bay, Scott Duncanson’s Somtam Express has won the IRC 1 class in this year’s Phuket Raceweek regatta.

Shifting winds played havoc with the start of the final race in the regatta yesterday and the fleet waited four hours for it to swing around to allow the race to start.

Once underway, the yachts set sail around Koh Bon, Koh Lone and Koh Hei with the finish line in front of the Evason Phuket Resort, which has been host to the regatta.

Somtam Express yesterday recorded yet another first-place finish to bring their tally to four firsts and one second place to score a tally of just six points.

Although impressive, it was not Somtam‘s best performance – at last year’s Phuket Raceweek Somtam Express won every race in the Sports Boat Racing class.

Although Peter Ahern’s Yo! 2 beat Somtam Express across the finish line yesterday, the crew finished fourth on the day and second overall with 12 points, followed by Jim Poulsen’s Vino in third place with 14 points.

John Vause on Ruby Tuesday finished second in the IRC 1 race yesterday to place fourth in the series, while David Lindahl’s La Samudra, although finishing third yesterday, finished in sixth place overall in the class.

Top honors in IRC 2 were up for grabs right up until the final race, but Peter Dyer’s Madam Butterfly was too quick for Mike Downard on Tua Lek on the day and scored another victory to win the class with eight points.

Tua Lek finished second overall in the class with 10 points, followed by Niels Dgenkolf on Phoenix with 11 points.

Tim Milner on Seekronghuk scored three first places and one second place to win the Multihull class even before the final day of racing got underway and scored a total of five points.

Henry Kaye on Mamba finished third overall in the class on 14 points.