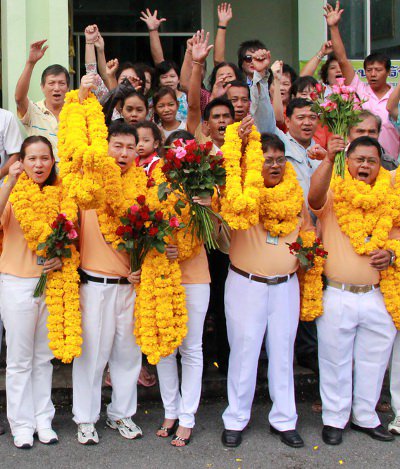 PHUKET: Somjai Suwansupana will run for re-election as Phuket City Mayor uncontested following the closure of candidacy registrations on Friday.

Former Mayor Somjai will lead her Khon Noom (Young Turks) party to the polls in the upcoming Phuket City Municipal election on June 16, marking her attempt for re-election to her third consecutive term as Phuket City Mayor.

Although running for office uncontested, Ms Somjai will still need to garner at least 10 per cent of the total number of eligible votes in the election to be installed as mayor, Phuket Election Commission Director Kittipong Thiengkunagrit confirmed to the Phuket Gazette.

Her Young Turks party will also have to overcome candidates from the Khon Roon Mai 2555 (New Generation 2012) party, who registered on Friday, and is led by Phairoj Ruamphunpong, a former Phuket City councilor.

Mr Phairoj said that his party was intentionally not entering a mayoral candidate in the election as he believes his candidates can achieve more meaningful results at the grassroots level and by supporting policies, not party dictates.

“We are ready to support any good policies, especially the educational budget. If elected, we will perform our work to the best of our ability under our slogan, ‘Speak truly, act truly’,” Mr Phairoj said.

The Phuket Gazette would like to remind business owners in the restaurant and entertainment industries that in accordance with the Election Act, as the election date has been set for Saturday, June 16, there will be a ban on selling alcohol within the Phuket City Municipal area from 6pm Friday, June 15, through to midnight June 16.