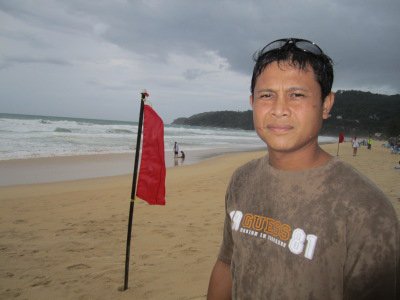 PHUKET: Fully equipped lifeguards are now back on duty at Phuket beaches, ready to rescue swimmers who get into difficulty during the currently treacherous weather.

Uten Singsom, head of the Phuket Lifeguard Club unit at Kata-Karon, told the Gazette, “This year we are going to have a new uniform and new flags. Both will be ready next week. Last year the warnings were written in Thai and English. I am not sure if they will add Russian to the warning signs this year.”

Mr Uten noted that despite the bad weather, tourists were not paying any attention to the red warning flags and still entering the sea.

“If tourists would just read the beach signs and flags it would help. If they followed the rip current emergency procedure it would give the lifeguards time to reach them.

“The worst thing to do in a rip current is to attempt to swim directly back to the beach. Instead they should swim parallel to the coastline and land further down the beach,” he said.

The negative attitude of some tourists toward the lifeguards was not helpful, he added.

“Sometimes lifeguards blow whistles to warn tourists that they are getting too far from the shore and risk not being able to make it back if they go any further out to sea, but the tourists react like they are are angry at the lifeguards,” Mr Uten said.

“I understand tourists come here for vacation and fun on the beach, but safety is important as well,” he added.

Although, lifeguard patrols resumed in full today with all stations manned and fully equipped, it was too late to prevent the deaths of two French tourists who drowned in separate incidents at Freedom Beach and Karon Beach last week.