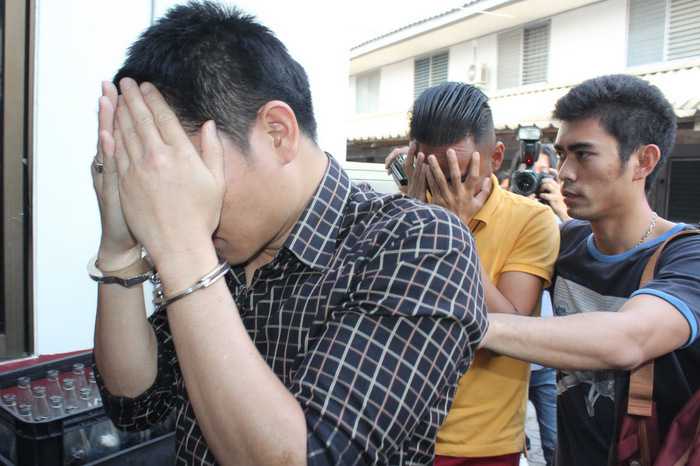 PHUKET: Five soldiers arrested by the Chalong Police may face court martial for the alleged abduction of a Ukrainian businessman and his wife last week.

“The soldiers are now at the 41st Military Circle barracks at the Royal Thai Army’s Region 4 base in Nakhon Sri Thammarat,” Region 4 Deputy Commander Ruangsak Suwannaka told the Gazette on Wednesday.

The Phuket Provincial Court issued arrest warrants for the soldiers last on December 20, identifying the wanted personnel as:

“We have yet to receive the arrest warrants,” Maj Gen Ruangsak said. “As soon as we receive them, we will take the soldiers to the Chalong Police Station to follow the legal processes.”

The soldiers were arrested by Chalong Police outside the Kasikornbank branch near Chalong Circle on December 18 in a raid that prevented Ukrainian businessman Igor Iermakov, 37, and his 32-year-old wife, Maryna, from allegedly being forced to pay a ransom of US$500,000 (16.4 million baht).

Mr Iermakov was reportedly abducted from Mitraphap Beach in Rawai by 10 people, including the five soldiers, earlier that day (story here).

However, Phuket’s highest-ranking military officer, Maj Gen Theenachat Jinda-ngern, told a press conference last Saturday – before the arrest warrants for the soldiers were issued – that the arrest of the soldiers for the alleged abductions was a “mistake”.

The soldiers were acting as mediators, Maj Gen Theenachat said. He added that they were present at the bank only to witness Mr Iermakova uphold his agreement to pay back some of the money he owed to a company in Ukraine called Fornus (story here).

However, Gen Theenachat did confirm to the press that he would not interfere with any police investigation into the incident.

“They can treat the case as they would any other case,” he said.

Meanwhile, Mr Iermakov and Myrna remain under watch and have yet to be released by officers assigned to their case.

On Sunday, Mr Iermakov and his wife were escorted by Capt Patiwat Yodkwan, inspector of the Chalong Police, to Mitraphap Beach – where the abduction allegedly took place.

They were then taken back to Chalong Police Station for further questioning.

However, Capt Patiwat declined to reveal their current whereabouts.

“Both are still in Phuket under police protection for the time being,” was all he was willing to reveal to the Gazette (story here).