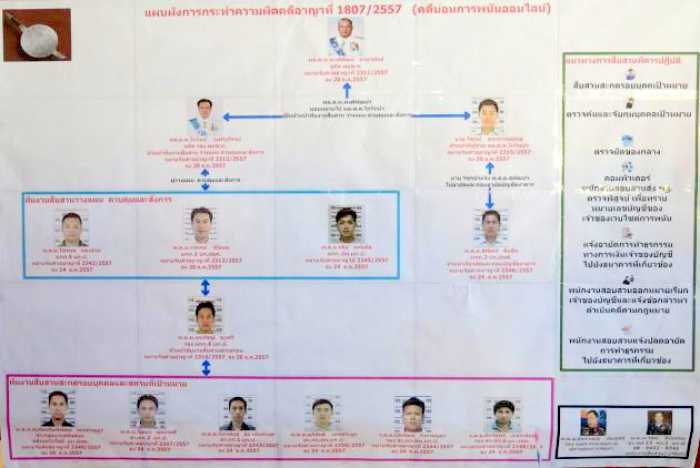 PHUKET: Arrest warrants have been issued for nine policemen accused of demanding and receiving bribes from an alleged Indian operator of an international online football betting network.

Gen Pongpat and three senior officers have already been charged with offences in the so-called Abubakar bin Sulaiman football betting racket, in addition to other charges for which they have been imprisoned.

The other charges pressed against the 13 officers in total include malfeasance and abuse of power, said Metropolitan Police Bureau commissioner Lt Gen Sriwara Rangsi-prammanakul. He was speaking at a press conference yesterday at Phaholyothin Police Station in Bangkok, which has taken the case.

Gen Sriwara said the investigators were monitoring 800 bank accounts belonging to the nine suspects and would raid their homes to obtain assets and determine whether they had been acquired with ill-gained money.

According to police, Col Watcharaphol, Col Worraphoj and Col Athip joined Gen Pongpat in the 2009 raid at the luxury home of property developer Karan Singh Thakral. They allegedly ordered other members to take money from bank accounts seized from Thakral and handed it to Gen Pongpat and Gen Kowit.

Gen Pongpat, then CSD chief speaking at a press interview after the raid, said 39-year-old Thakral was part of the online gambling network of one Abubakar bin Sulaiman. The network’s turnover to date is alleged to be more than 3.2 billion baht, with police suspecting the enterprise was also involved in other unspecified illicit businesses.