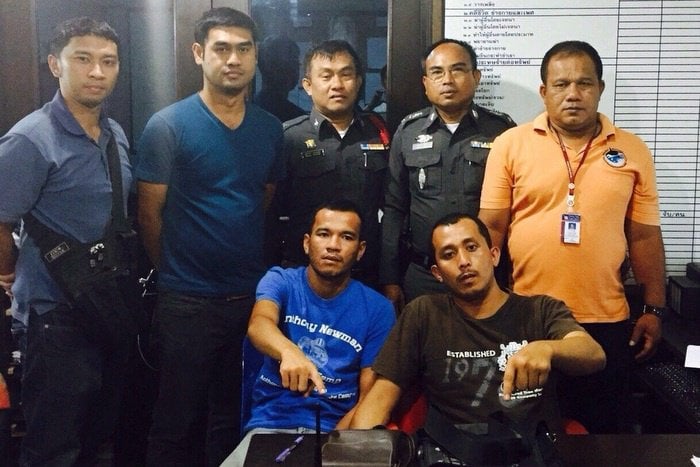 PHUKET: An army private and his friend were arrested in Thalang last night for bag-snatching.

“We were able to identify the suspects from a description given to us by the victim,” Cherng Talay Police Superintendant Serm Kwannimit told the Phuket Gazette today.

“The two suspects grabbed the victim’s bag and sped off together on a motorbike.”

Private Chonlatea Krolek, 23, who entered the military in April and is based at the Phaya Intira Military camp in Pattani, and Krittameth Jampada, also 23, who had just completed his two-year military service on May 1, were arrested at a self-service petrol machine on Srisoonthorn Road in Thalang.

“Luckily, we were informed quickly and able to catch them at the gas pump during our search of the area,” Col Serm said.

The two men were caught with 540 baht, a mobile phone and the victim’s backpack. Police also seized a walkie-talkie and the motorbike used in the robbery.

Both men were charged with committing theft at night using a motor vehicle.

“They both confessed to the crime,” said Col Serm.

“Mr Chonlatea will be sent back to the Phaya Intira Military camp to face the charges there. Mr Krittameth will be sent to the cells at Phuket Provincial Court while we continue our investigation.”