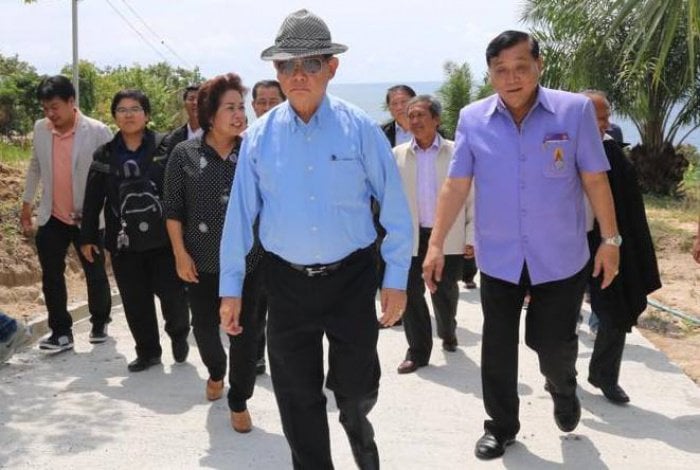 PHUKET: A plan by Patong Mayor Chalermluck Kebsup to transform an area of 69 rai of long-contested land near Tri Trang Beach into a public park received special attention last weekend.

Gen Intarat explained to the accompanying members of the press that the Agriculture and Cooperatives Ministry and the Interior Ministry were working on “returning the land to Patong locals”, after years of its ownership being contested in the courts.

“However, as of today, the land has yet to be returned to the state because of a recent claim to its ownership,” he confessed. “We want to take back the land, but we will wait until after the Supreme Court has made its final decision.”

Ms Chalermluck told the Phuket Gazette yesterday that she had no idea that the ownership of the property was still being contested in the courts.

The Supreme Court had ordered that the land titles be revoked for 3,000 rai of land in Phuket; the titles for the 69 rai of land in question being among those deemed to be illegally issued under the notorious SorPorKor 4-01 Phuket land-grab scandal 10 years ago.

The SorPorKor program in Phuket began in November 1994, when then-Agriculture Minister Suthep Thaugsuban ceded title deeds to 592 plots, including land near the Kata Viewpoint, Kamala and other parts of the Nakkerd Hills, to 489 farmers.

The SorPorKor program aimed to give poor, landless farmers the right to use government land to farm in order to make a living.

However, in the unravelling of a national-level scandal that eventually led to the downfall of the Democrat Party under the leadership of Chuan Leekpai, investigators swooped on the Phuket branch of the national Agricultural Land Reform Office in 2003 (story here).

In 2004, SorPorKor papers for 3,000 rai were revoked, following a ruling by the SorPorKor Land Commission in Bangkok that the land was not being used by poor farmers as intended. (story here).

It was later found that members of 11 wealthy families in Phuket were among the recipients of the properties (story here).

“The Supreme Court ruled that Banlue Tantiwit was not qualified to receive SorPorKor land,” she said. “I thought that the land had been returned to the state since that is what the Supreme Court had ordered.”

“But now, another person has filed an appeal and claims to own the land. I do not know who that person is.”

Nonetheless, Ms Chalermluck vowed to have the site transformed into a public park.

“Once the land has been returned to the state, we will turn it into a Patong ‘green place’,” she said.

“This will become another tourist attraction. There will be a lot of things to do.

“It will take time, but I will do my best to give more to Patong and the tourists who visit here.”