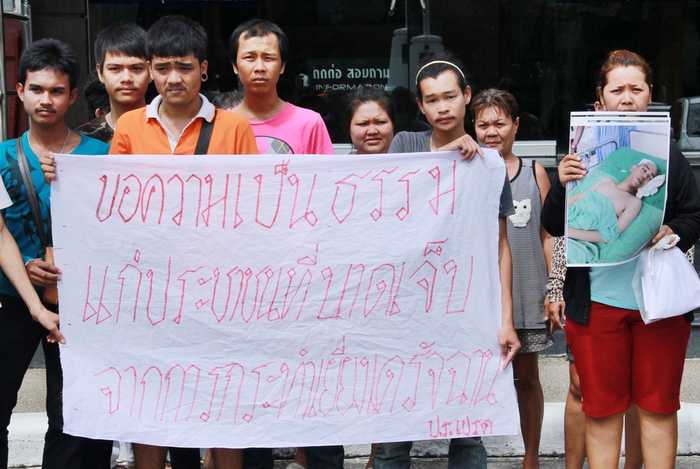 PHUKET: Social networks are buzzing with allegations of police brutality at a checkpoint in Phuket Town on Saturday night after video footage surfaced of rescue workers treating an injured man.

The stir comes from the video footage in which Chaiyarong Trongtor, 25, asks rescue workers, “Why did you hit me with a baton?”

“When I arrived, after my team, Mr Chaiyarong was lying on his back with blood covering his head,” Kusoldharam rescue worker Chukiat Ayuperm said.

“While we were helping him, he kept asking us, ‘Why did you hit me with a baton?'”

Mr Chaiyarong remains in the care of Vachira Phuket Hospital with a blood clot in his brain. He is still unable to fully explain the events of the night, Mr Chaiyarong’s sister, Umaporn Iedsen, told the Phuket Gazette.

“My brother was with a friend that night. They were returning from work when they arrived at the police checkpoint. My brother’s friend went through first and didn’t see what happened to my brother,” she said.

“However, he said that it couldn’t have been an motorbike crash because he would have heard it – and he didn’t.”

Ms Umaporn, her parents and about 20 others yesterday demanded justice and an investigation into what happened that night.

Phuket City Police Superintendent Sermphan Sirikong met the group and promised to look into the matter.

“We will investigate the cause of Mr Chaiyarong’s injuries,” Col Sermphan said.