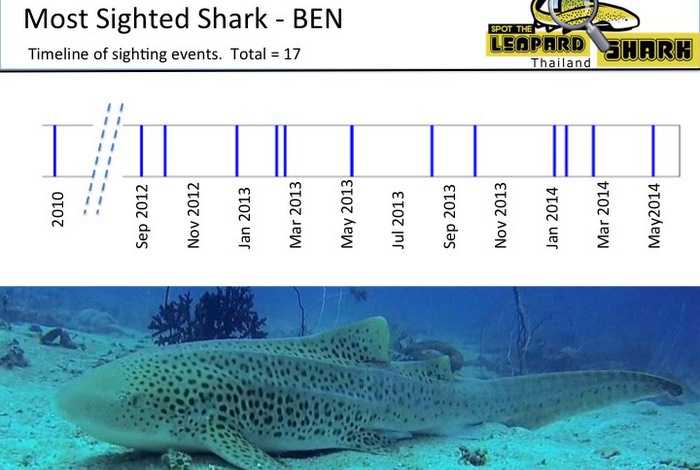 PHUKET: The database for Spot the Leopard Shark Thailand has grown to more than 500 photographs after the conservation project was launched in August last year (story here), it was announced at a meeting hosted by Siam Diving Enterprises in Phuket last week.

“We had the presentation to inform the dive community about the project, as well as about the extraordinary leopard sharks themselves. And this was also an opportunity to keep those project participants updated on what we’re finding,” said Dr Chris Dudgeon of the University of Queensland, Australia.

The project, much like E-Shark Thailand (story here), is mobilizing a grassroots effort to set a baseline for the number, size and sex distributions of shark populations. By monitoring the leopard sharks over a long period of time, it will be possible to learn whether the populations are changing for the better or worse or staying the same.

In the first year, the grassroots project received photos from 83 participants, including archival photos dating back to 2004.

Shark Guardian is a charity established by Brendon and Liz Ward-Sing to help spread the word about the mistreatment of sharks. Video: PGTV

“Most sightings come from the Phi Phi Island region with some photo contributions from the northwest region (Similan Islands), southwest region (Koh Lipe) and also some older photos from the Gulf of Thailand,” Dr Dudgeon said.

From photos submitted to the project, researches have been able to identify 188 different sharks, though there is a chance for some redundancy due to photographs being taken of only the left or right side of the shark, which marks the importance of participants photographing both sides of the creatures.

“While leopard sharks have similar markings on both sides they are not perfectly symmetrical, so it’s possible that some of these sharks that only have photos from one side will match up with other sharks in the database in the future as photos become available,” Dr Dudgeon explained.

Some sharks only show up in the database once, while others like “Ben” have had 17 identified sightings in the Phi Phi Island area since 2010, suggesting he is a resident shark of the archipelago.

“New sharks are constantly being added to the database, so we certainly haven’t found them all yet, which is good news for the Thai Andaman Sea population,” said Dr Dudgeon.

The more sharks there, the healthier the population is, she added.

“However, we still need to collect more photos to get a much better idea of the true size of the leopard shark population in Thailand,” Dr Dugeon said.

“The project has gone fantastically so far, and we couldn’t have accomplish this without the contributions and support of the diving community and the Phuket Marine Biological Center.”

Girl remains in Phuket hospital after ‘hail’ of paint cans